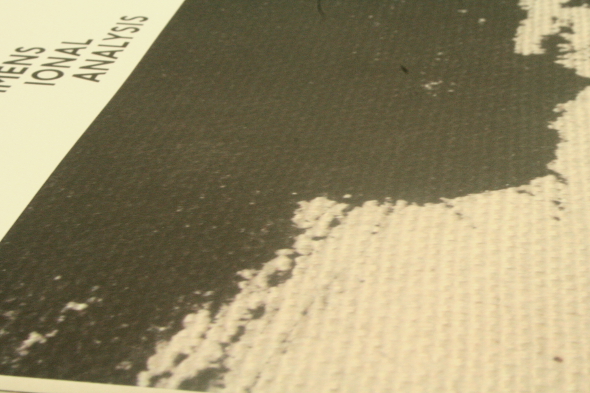 Having spent time away getting freaky in the mutant mechanized funk of Sensate Focus, Mark Fell returns to his given name on this double-sided study for Liberation Technologies. With the diversity of what has come before on the Mute sub label (Powell, Bandshell, King Felix and British Murder Boys), it seems as logical a place as any for Fell to shore up and fire up his systematic style.

There are certain traits that carry through from his work in Snd to the Sensate Focus output and onwards. The most notable of these would be the synths – highly buffed slithers of Detroit soul that shimmer and shine, reminiscent of the earliest Jimmy Edgar material as much as Fell’s own work. Likewise the drum sounds are nearly always filed down to a sharp point, all the better for programming into infinitesimal patterns.

So it is on both “Sections 1-7” and “Sections 8-14”, the two sides of this record that makes up an elongated, progressive piece that slowly unfurls over twenty odd minutes. In its infancy, some of the groove and measure that Sensate Focus possesses can be felt as the beat kicks off on a stop-start groove and the synth comes fluttering in and out accordingly. It is in fact the synth that starts acting up first, wriggling free of the constraints to make its own merry dance with a filter. This sequence keeps up until the five-minute mark, holding down a consistency of sorts until the switch gets flicked and the beat shatters into hyper-detailed shards. As live sets from Fell attest, he has a love of the fill function that can send a rapid-fire repetition of any given beat into the mix, and this is the point where the precise insectoid flutterings start occurring.

Of course, most of the dramatic shifts happen very subtly in this kind of arrangement, the dazzle of sonic information making it tricky to pick out the specific changes as they occur. Only when the side flips is it more tangible that a change has taken place, leaving you wondering whether this was lifted from an extended live jam with an appropriate split point chosen for the purposes of vinyl. The second side gets more purposeful in its choppiness, calling to mind the robotic qualities of Autechre’s Untilted LP, a strong sense of pre-ordained systems inflicting their processes on a sound set rather than each individual moment being guided by human hand.

After all, with all of the work Mark Fell does (maybe bar his collaboration with DJ Sprinkles) it’s hard to fathom a human mind being able to instruct every miniscule movement in a given piece, let alone across twenty minutes. Instead, the overwhelming feeling is that his role is as conductor, nudging and teasing his in-the-box beauties as they frolic around the digital pathways laid out before them. As ever, it’s an unbridled pleasure to sit back and marvel at the mathematical fantasy of it all.