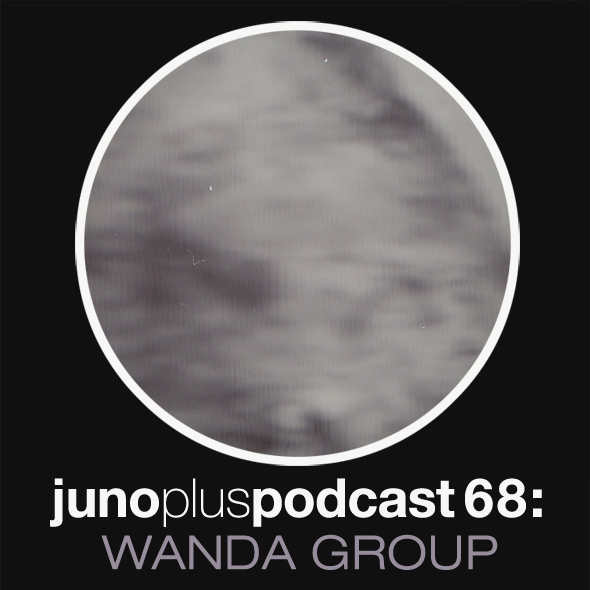 Brighton based WANDA GROUP steps up for mixing duties with 30 minutes of his own unreleased material.

As you might have gathered we’re big fans of WANDA GROUP here at Juno Plus; under this alias, Louis Johnstone seems to have found a rich creative outlet to explore his world of dense, outer dimensional sonic collages, arming labels such as NNA Tapes, Vlek, Further and Opal Tapes with some memorable releases. The music of WANDA GROUP is further complemented by his distinctive online persona, using all forms of communication as tools to unleash his equally abstract thoughts on the mundanity of everyday life delivered exclusively in All Caps format.

Having fully established the WANDA GROUP sound with a veritable raft of cross format releases last year, 2013 has seen the producer in less prolific form. A self released album issued back in February has been followed by an appearance on the Cleaning Tapes compilation and most recently a 12″ inauguration for the Brighton label in the form of the brilliantly titled Masculinity Is A Wonderful Thing. That two track release was presented as Johnstone’s homage to his own father and grandfather and is the latest example of WANDA GROUP’s music being informed by deeply personal central concepts. It’s an approach he’s taken in completing a mix for us which is subtitled A SLAB ABOUT HOW ELSIE DIED AROUND A MONTH AGO and contains some thirty minutes of all new material produced in dedication to his recently deceased Grandmother. It’s essentially a new WANDA GROUP album.

Next week sees WANDA GROUP continue his recent embracement of performing live with an appearance at Astro:Dynamics label showcase in Dalston at Café OTO alongside Belgian button smasher DYNOO – more details here. Ahead of that, WANDA GROUP was kind enough to answer a few questions via email in his own inimitable fashion of course.

Hi WANDA GROUP how are things?

ALRIGHT, MATE. PRETTY NICE FOR ONCE, ACTUALLY. WELL NOT ONCE BUT I MEAN NOT FUCKIN BAD. MET A LOVELY WOMAN OUT OF THE BLUE AND MY SOUL SEEMS TO SING A LITTLE BIT MORE. LESS BLUE AND MORE PINK, I THINK (MAYBE).

Thanks for completing this mix, what was the thinking behind it?

BEHIND THIS WAS MY NAN. SHE DIED AND IT DID ME IN. NOT IN A OUT OF CONTROL SENSE BUT JUST THE COMPLETE IDEA OF HER JUST FUCKIN OFF INTO DUST HAS DONE ME. LOVELY WOMAN. THIS MIX IS JUST VOICES OF MY PARENTS, SISTER AND FRIENDS. IT CONTAINS SHIT FROM BEFORE SHE DIED AND AFTER SHE DIED. A LITTLE DIGITAL MEMORY OF ELSIE. SHE IS GONE BUT I GUESS WE ALL GO SOMEWHERE (WELL NOT SOMEWHERE BUT JUST GONE).

Although you’ve been involved in various projects over the years, WANDA GROUP seems to be the outlet for you that’s most productive, do you think there is a specific reason for this?

I HAVE NO CLUE. I THINK MAYBE IT JUST SEEMS TO WORK AT THE RIGHT MOMENT AND THE RIGHT TIME. WANDA GROUP WILL GO ON UNTIL I DIE, I HOPE. THE HERS I ENJOY BUT ITS MORE OF A BASIS FOR WHAT I WANT TO DO WITH THE WANDA GROUP STUFF. I DON’T KNOW, SIR. I JUST THINK WANDA AND THE GIRLS ARE GETTING INTO SOME SERIOUS SHIT AT THE MOMENT. ONE COMPLETE STARED OUT VISION, MAYBE (MAYBE NOT).

There always seems to be quite a heavily contextual subtext to your work, sometimes deeply personal too. Is this important to the genesis of how you approach making the music?

I COME TO EVERYTHING WITH A SET IDEA ABOUT WHAT I WANT IT TO MEAN FOR MYSELF. MY DAD OR MYNANOR A LITTLE HALF A SECOND ABOUT MY SISTER GIVING ME SOME SHIT BECAUSE I GAVE HER SOME SHIT ABOUT NOT WORKING. JUST THEM TINY LITTLE MOMENTS. ITS MORE ABOUT WHAT I WAS THINKING AT THE TIME THAN WHAT WAS ACTUALLY GOING INTO THE MUSIC. THIS TIME I HAVE BEEN MORE DIRECT AND HAVE PUSHED ALL THE SOUNDS OF MY FAMILY AND FRIENDS INSIDE IT (ETC)

The last twelve months has seen you appear on all manner of labels, is there one release that you are particularly proud of?

PISS FELL…. IS THE ONE I LOOK BACK ON WITH TERROR. I LOVE THE RECORD BUT I CAN’T REALLY LISTEN TO IT BECAUSE FOR THE MONTHS THAT I WAS MAKING IT I FELT A BIT DONE IN AND TIRED. I WOULD LEAVE THE HOUSE TO GO AND HAVE A FAG AND THE WORLD JUST SEEMED A BIT FULL OF TOO MUCH WEIGHT. I NEED TO FUCKIN GET ON WITH SHIT AND STOP WORRYING TOO MUCH BUT I GUESS ALL THAT JUST FUCKIN FLEW RIGHT INTO THE RECORD AND WORKED (MAYBE IT WAS SHIT. I HAVE NO CLUE) 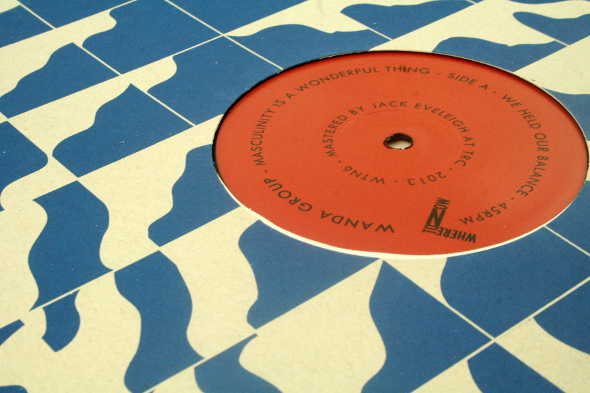 You’ve just released through the Brighton label Where To Now? Did the label give you a specific remit for this?

NAH. THEY JUST SAID THEY WANTED TO DO A DISCO SLEEVE TYPE RECORD AND I THOUGHT ABOUT MY DAD AND MEN AND ALL THE LADS IN MY LIFE AND JUST WENT FROM THERE. MOST OF IT WAS MADE JUST AS I HAD MOVED INTO A NEW PLACE. I LIVED ON MY OWN FOR A WHILE AND I JUST COULD NOT SURVIVE. I WORK FULL TIME BUT IT JUST DIDN’T PAY ENOUGH. I DUNNO WHY I AM GOING INTO ALL THIS BUT YOU MIGHT ASWELL GET A LITTLE IDEA ABOUT IT (SORRY, SON).

Do you have any more releases in the pipeline?

I DO, MATE. I HAVE FINISHED THE OUTER ALSATIAN FOR NOTOWN RECORDS WHICH MIGHT BE OUT IN ABOUT A MONTH OR SO. THIS IS THE RECORD ABOUT MY TWO DEAD DOGS. ABOUT A WEEK AGO I FINISHED MY NEXT FULL LENGTH WHICH I HAVE SENT TO THE LABEL. JUST WAITING TO SEE HOW IT ALL PANS OUT. WHO KNOWS. I ENJOYED DOING THIS ONE (PROBABLY SHIT, THOUGH)

You’ve been taking WANDA GROUP to the live stage this year – what’s this experience been like for you?

YEAH I HAVE NOT PLAYED LIVE FOR AROUND 6 YEARS BUT THOUGHT I WOULD GIVE IT A GO. ALWAYS DID NOT WANT TO BE SOME CUNT ON A LAPTOP JUST STANDING THERE AND FUCKIN LOOKING LIKE A MUG. THIS IS WHAT I HAVE BECOME BUT I MAKE IT MORE TENSE AND STRESSFUL FOR MYSELF. I NEED TO TURN UP WITH A HEAVY BAG OF GEAR. I NEED TO BE TIRED BEFORE I EVEN START THE SET. I AINT SURE WHY I STRESS MYSELF SO MUCH. I THINK MAYBE IT MAKES ME FEEL LIKE I AM DOING SOMETHING RATHER THAN JUST FUCKIN SITTING ABOUT LIKE A CUNT IN A ROOM WAITING FOR A BIT OF ENERGY TO FALL OVER ME (I DUNNO, SIR)

Do you construct entirely new tracks when playing live or rework existing productions?

I TRY TO HAVE IT ALL AS OPEN AS POSSIBLE. I HAVE A TAPE DECK AND SOME CONTACT MICS WHICH I JUST FUCK ABOUT WITH. CONTACT MIC INSIDE THE TAPE DECK OR INSIDE MY TROUSERS, ETC. THEN MY LITTLE SHIT LAPTOP WHICH I USED TO PLAY AROUND WITH STUFF. EXISTING PRODUCTIONS ARE ALL SPLIT UP IN SECTIONS BUT NOT SEQUENCED. JUST TINY LITTLE SECTIONS THAT I TRY TO SPLIT AND CUT AND DIVE INTO AS I GO ALONG. IT STRESSES ME OUT BUT IT KEEPS ME IN CONTROL AND I LIKE HOW FOR 40 MINUTES OR SO I CAN JUST FUCKIN LOCK INTO SOMETHING THAT AINT CARE WORK.

1. A SLAB ABOUT HOW ELSIE DIED AROUND A MONTH AGO