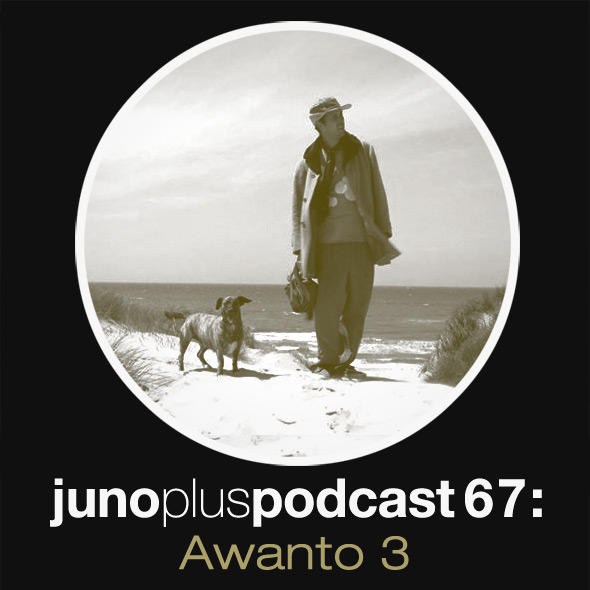 Best known as Awanto3, Steven van Hulle has been a fixture of Amsterdam’s house and boogie underground for the better part of a decade; first as part of the Rednose Distrikt crew alongside Kid Sublime and then Aardvarck, and then under the Steven de Peven alias, under which he produced some notable collaborations on Rush Hour with another local veteran, San Proper. Recent years have seen van Hulle adopt the Awanto3 moniker and form close ties with Tom Trago, with whom van Hulle also collaborates as Alfabet – a project that has seen the men take on the task of producing 13 records of dusty body music spanning sides A to Z.

Although arguably not as well known as some of his friends in the city, recent releases across Trago’s Voyage Direct, Dekmantel and the new label endeavour from Parisian club Concrete have seen his profile rise considerably. With a live set at the inaugural Dekmantel Festival in Amsterdam later this month, and his debut album for Rush Hour arriving at some unspecified point in the future, we thought the time ripe to get a podcast from van Hulle.

His 60-minute set is a typically sumptuous collection of unreleased exclusives (including an unheard track from his forthcoming album) and old favourites that draw heavily from his circle of friends and associates in Amsterdam and beyond, with a mix reflecting his own colourful productions with nods to classic house, techno and boogie. Van Hulle was also kind enough to answer some questions about his rich past, his upcoming album, and the best spots to go digging in Amsterdam.

Hi Steven, how are things in Amsterdam at the moment?

At the moment I cannot say anything about Amsterdam except that I have been working there in the studio for the last two months finishing my album. Now I’m at home again at the seaside. I miss my friends living there and the city probably rocks on until the breakadawn. Summer in Amsterdam is beautiful.

Thanks a lot for doing this mix – where was it recorded and how?

Actually it is not really a mix but a selection of tracks cut and pasted together. I used the program Soundforge for this. Back in the Rednose days Aardvarck & me used to make podcasts like this. We did not have any decks at home so this way of working made it possible to finish something on time. Because I was at home recording this, and not in the studio in Amsterdam I thought it would be nice to relive those days a little.

Is there a particular narrative to it? Or is it just a case of current favourites and classics that fit together?

The selection consists of just few already released favourite tracks and mostly exclusive ones – it’s mainly a one hour preview of exclusive tracks made by befriended producers from around the city. I wanted to give you a showcase of what is happening in Amsterdam at the moment, what it sounds like.

You’ve been involved in the city’s music scene for some time now, why do you think Amsterdam has remained so musically vibrant?

I guess this has a lot to do with the state of the past and the dope / grass available for everybody so it attracts lots of artists from outside, the hidden studios everywhere and the vibrating connections between organizers, artists and different little scenes following their courses…

Do you play out a lot in Amsterdam? If so where’s your favourite venue?

I used to play out a lot in Amsterdam over the past 20 years but my body begged me to quit that bullshit and take care of it more so I listened. I want to become older then 123. My favourite venues are the smaller places where I can do whatever I want, such as Redlight Radio or the Eddie the Eagle parties. Trouw is also a venue where I like to play because of the excellent soundsystem, the audience and crew working there.

You’ve obviously worked with a lot of labels and artists in the city over this time, I guess Mike Aardvarck and Tom Trago are those you feel most comfortable in the studio with?

Tom and myself made lots of hours in the studio the last few years indeed. Mike and I used to live together for a very long time and shared almost everything, so yes, these are my closest friends in this way for sure. Also San Proper was part of the sessions lots. Now things have changed a bit: I moved out of the city to the north of Holland, Mike Aardvarck has moved to Bali and Tom & San became very successful and are playing lots outside of Holland so it’s different now.. It looks like the end of a cyclus has arrived for us, and a new one is beginning I guess.

Will there be any more Alfabet releases? It seemed like Tom and yourself were aiming to reach Z across 13 12”s at one point?

Alfabet is a kind of symbolic project that stands for our connection and friendship. It will never die and we only produce and release whenever we feel like it or when the time is right for us again. No pressure, just reach the Z and afterwards follow it up with the Chinese alphabet. It is for the love basically. Just keep your eyes and ears open for the new one…it’s on its way.. like a turtle, slow but sure…

Mike is based in Bali now correct? Have you been out there?

Yes, I visited him last year together with Tom, I am saving money to go again because I miss him lots. He started a small place called ESKIMO, he is the creative director and feels totally fine over there. He finally found himself after long time of difficult and heavy years here in Holland. The cold and Dutch vibes were not feeding him enough positive powers to continue to work like he wished. He needs the sun and his roots are from there as well, he followed the dream he had for a long time. And it works! His releases are shining like him. Listen to his latest stuff and you will get it.

Obviously there was an Aardvarck remix on your last 12”, which leads nicely into your upcoming album. I gather it’s all finished now, how long have you been working on it?

I started focussing on my album in the winter of 2012 until now. It is not finished yet, the mixes are mostly done but it is still under construction: artwork, final mix check and mastering… it is very exciting, really looking forward to throwing my baby out of the house and let it live for itself.

What can we expect from it?

The album is made for the dance floor and for the road. No singer-songwriter stuff. Just bounce and make a trip to…

Did it ever cross your mind to work with anyone but Rush Hour for the album?

Not really – except Voyage Direct. But that is kind of the same family…

Deviating slightly, I’ve read that you are quite the fan of the Chinese classic text I Ching. Can you explain why it resonates so much with you?

It is not so easy to talk about it because it is a very personal and so delicate subject actually. But in short: It is my personal advisor in times of doubts and worries. I am also kind of studying I Tjing by using it for lots of different daily stuff. One day I would like to be very able to help other people with it. The fact that there is no god related to this book I really like also. But the less I need it the better…

Aside from Rush Hour, where’s your favourite spots to go digging for records in Amsterdam? I really enjoyed Record Mania when I was in town…

Record Mania is a great and steady one indeed! I like to dig in second hand markets and Concerto I also like for the variations available. Lots of jazz, classical stuff or world music. Most of the record stores have died over the last ten years, there are just a few left and also a few new born. Check the small record stores at Redlight Radio in the red-light district. They have a killer selection for sale and great personal vibes.

Finally, where’s the best spot for local delicacy Bitterballen in your opinion?

You must ask this question to San Soda & Tristan from 22 tracks in Brussels. They are the specialists!