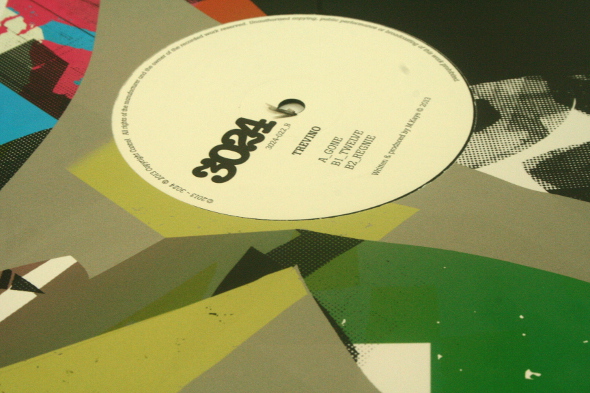 With over two decades of DJing and production experience under his belt, Marcus Kaye wields a breadth of releases under his own name, as well as the Kosh and Marcus Intalex monikers. But in recent times, it’s his Trevino identity that has surpassed all his other projects in terms of output, a whopping eight releases last year. While Kaye’s stated on record that “this whole Trevino thing feels new to me… I don’t know what’s regarded as protocol…and what people expect of me”, he certainly has enough accolades at this point from labels such as Klockworks, [NakedLunch] and Apple Pips to do away with the burden of expectations altogether.

Kaye’s fresh-faced foray into the world of techno might be why his busy release schedule has yielded positive results, and his return to Martyn’s 3024 label following to last year’s Tactical Manoeuvre EP finds him playing fast and free with styles, while still retaining an element of his signature rumble. “Gone” is a slinking deep house number that channels “Express” era KiNK, a propulsive clacking slow burner with intermittently bumpy percussive measures tempering out the affair. Immediately striking is how much more melodically harmonious “Gone” is in comparison to Trevino’s recent release on Ben Klock’s imprint, reigning in a bit of the growling, high-ante pressure that’s often lurking in Kaye’s tracks.

But if the sense of foreboding chaos is what draws you to Trevino’s productions, “Twelve” hovers above the rest of the release in terms of aggression, with a ghostly piano line furiously stomped out overtop of the angelic, hymn-like rhythm sweeping the track. Kaye spends three minutes building up to the moment, and it only lasts briefly, but it’s a striking display of Kaye’s comfort with tightly-wound, give-and-take moments.

“Regnie” has moments reminiscent of WAX 50005 stamped on it, with those quintessentially-techno hi-hats darting in and out of the track’s edge, while a boiling stew of blippy acid percolations twirls beneath. It’s a pity that digital-only cut “Pimlico” didn’t make it onto the wax, because it’s another moment that finds Kaye untraditionally subdued. Or, maybe subdued is the wrong word, since it utilizes a great, building thrumming to unsettling effect from it’s opening seconds – reminiscent of John Harrison and Sputzy Sparacino’s soundtrack to the opening scene of George A. Romero’s Day of The Dead, it feels as if something unmanageably huge is about to come into view. Kaye keeps the track on a slow simmer, adding dissonant keyboard notes, satisfying 4/4 drumline, and a static hiss that persists the first half of the track, only to re-emerge at the end, constantly on the edge of engulfing the whole thing.

Though all tracks on 3 & 1 contain something inherently Trevino about them, it’s becoming hard to nail down what exactly marks this trademark anymore. If you replace the blade and handle on an axe, it’s questionable whether it’s the same object you started with – but somehow, with Kaye’s continual sonic expansion, whatever genres and tempos he tackles, there’s a hard-gnarled familiarity lying at the core of it.

A. Gone
B1. Twelve
B2. Regnie
Pimlico (digital only)