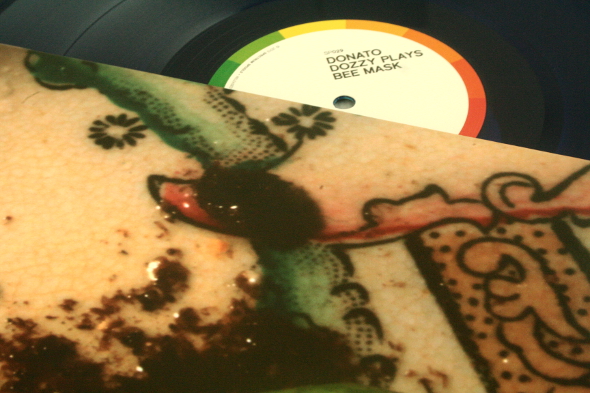 It’s an especially healthy time to be into ambient electronic music, not least when you get presented with propositions as enticing as this one. Bee Mask’s thirteen minute opus “Vaporware”, draped across the lead side of his release for Room40 last year, particularly held within it a great potential for imaginative remixing, but the artist couldn’t have been expecting the response he got from Donato Dozzy when he approached him for a remix. It was a smart move, either on the part of Bee Mask or Spectrum Spools who now release this collection, as Dozzy has a rich history in ambient material as much as his transcendental techno ways, but even they must have been shocked when the Italian producer returned not one but seven full-bodied reworks.

The original “Vaporware” is deserved of the ‘opus’ title as it moves through distinct phases, from crisp bleeps and cyclical machine twitterings to dramatic string and chime incidentals to soaring arpeggio magnificence and beyond, and this forms the crux of how an album of seven different reinterpretations can take place without seeming trite or excessive. Where the original material is so stark in its varying shades and moments, Dozzy has capitalised on the creative potential contained within these compound parts and explored them through his own lens.

There is a pleasant mixture between the sweet and the terrifying here, not least in the first two tracks. “Vaporware 01” takes on the delicate chimes that occur both midway through and at the end of Bee Mask’s version, surrounding them in a cascade of pouring rain run through a reverb unit, and it makes for a heart-wrenching piece that only increases in its emotional impact once the synth strings come drifting in on top. “Vaporware 02” is less explicit in its source, but instead opts for a cacophonous drone of grinding metal, a melody trying desperately to reach the surface but constantly pushed down by the weight of industry.

“Vaporware 04” is a particular treat, choosing the opening gurgles of machines as the central theme and treating them with enough atmospheric processing to summon up a tone of classic early experimental techno, applying a surprisingly light touch in doing so with the utmost respect for Bee Mask’s work. “Vaporware 06” however takes a bolder stride, choosing part of the nervous arpeggio from the centre of the piece and stringing it out into a hypnotic pulse that drowns in a bath of reverb over five minutes of blissed-out abandon. Bringing everything full circle, “Vaporware 07” returns to the chimes and crafts the most sumptuous, melodic track from their playful insistence. It’s a stunning render of the original sounds, honing and shaping them until they become crystalline, while composing a fresh backdrop of pads to create a more discernible, fluid harmony.

It would be overly simple to describe Dozzy’s process as taking component parts of “Vaporwave” and bettering them, but in his bold undertaking of this project he has managed to both fully doff his cap to the originator and boldly assert his own production excellence in a humble yet grandiose fashion. Such contradictions don’t come easily to many, which makes the achievement all the stronger.