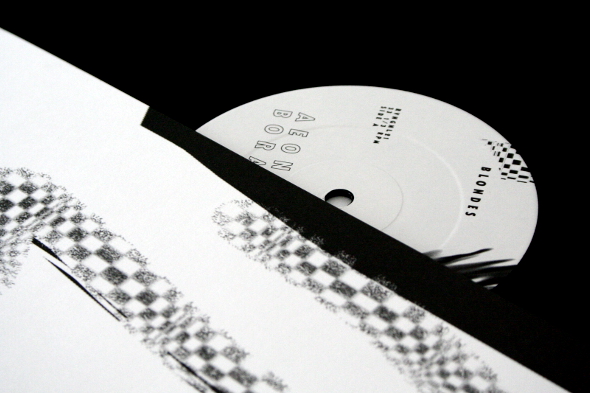 Blondes’ new album Swisher builds on the well-executed formula of last year’s self-titled debut LP for New York’s RVNG Intl, bringing percussion to the forefront while relying on ever evolving and unfolding electronics. Drums fuel the tracks of the album, propelling the swirling, expansive synths that lie beneath.

First meeting whilst studying at Oberlin College in Ohio, Sam Haar and Zach Steinman began the Blondes project in 2010, scoring a well received debut EP for Merok, but it wasn’t until they moved to Berlin that the project truly hit it’s stride with the series of duality themed 12”s for RVNG Intl that formed the bulk of their aforementioned debut. This second album came as somewhat of a surprise, with little in the way of PR to pave the way for the release. However, the driving strength of the album allows it to stand on its own, a dense nine-track exercise in sensory indulgence.

Swisher is a shimmering mass of electronics, a slowly brewing melange of vibrant sound. Gently drifting tracks float between more driven beats, and perhaps suggest influence from German bands like Cluster; drawing on a rich pastoral history that is then combined with darker techno influences. Percussion based tracks create a visceral tension, and melodies weave throughout, forming lush sonic landscapes. Harsh textures are found in “Bora Bora”, bringing to mind the crude aggressive blades of a fleeing helicopter, a track transformed skilfully into a paranoid dance number. In the same vein, the clanging abrasiveness of “Wire” seemingly draws on a post-apocalyptic theme for inspiration. Tracks like “Poland” and “Andrew” entrance the listener with a smoky haze of opiate euphoria, contributing to the LP’s mystical voyage.

The tracks on Swisher all unfurl in the same slowly building manner and while some reach a sonic pinnacle, others seem to circulate endlessly; exploring feelings of emptiness that eventually fade away without consequence. These mind altering electronics that bend and morph through the ears of the listener hint at a thoughtful and recollective sense of vacancy and warped darkness, resulting in an album that’s deeply rooted in introspection.