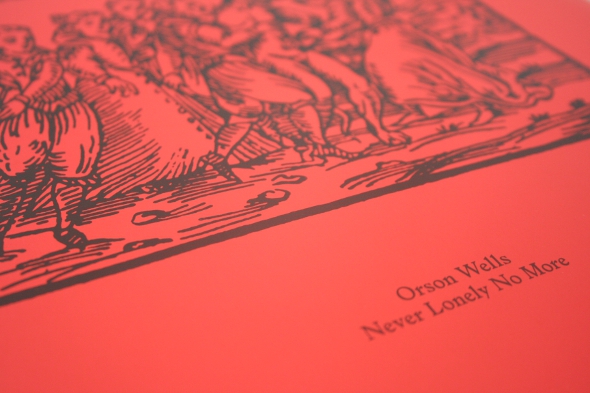 Never Lonely No More sounds like exactly the sort of thing that an extremely lonely person would name a record, so hopefully it’s just a coincidence that the Frankfurt-based Lennard P. (known better to many as his Orson Wells alias) recently posted an article to his Facebook page about getting one’s ashes pressed into a vinyl record. It’s not that Wells’ latest release on the artistically inclined Live At Robert Johnson label is purely about isolation, but track names like “Leaving & Searching” do suggest that there’s some serious introspection taking place throughout. And while Wells has proved himself more than capable of wielding Chicago drum-heavy house sounds as demonstrated in previous Chiwax compilation Frankfurt Tracks, his new work also contain some stunningly beautiful moments which weave those dance floor influences into something intricately greater than the sum of its parts.

Opening track “Leaving” is guaranteed to have you setting the needle back to the start before listening to anything else. Achieving immediate harmonic catchiness with expressive shuffling textures and haunting use of scaling bells, it feels like a chilled out revision of Beautiful Swimmers’ “Swimmer’s Groove”, tweeting whistle sounds left intact but with siren-esque, winding synths replacing chunky disco riffs. But whereas “Swimmer’s Groove” is a beach-house jam tailor-made for clear skies, “Leaving” heralds the arrival of fall, conjuring images of swirling leaves and cloudy skies. Whilst his aforementioned earlier contribution to the Chiwax compilation made use of clapping high hats and fizzy, carbonated acid lines for succinctly animating dance floors, “Leaving” leans towards the contemplative side of Wells’ catalogue – It’s only at the end of the track that you realize Wells has snuck a simmering acid squiggle into the framework of what began as a pensive track.

A similar feeling of serenity is transmitted in the first half of “Searching”, but a meaty kick drum and clattering drum machine eventually chip away at the effervescent synth that kicks off the song. The result is a blend of lush soulful rhythm clashing with sharper metallic  elements – and while Wells has at least one abrasive experimental alias with which he churns out a genre self-described as “slow filth”, the interplay between hard and soft on “Searching” never grates. The record’s flip contains two searing cuts leaning closer towards a maximal club aesthetic – “Jungle Warrior” has Wells frothed up into a barrelling series of percussive spasms, looping a morphing plethora of patterns overtop each other again and again, sounding somewhat like a lost-level from the N64’s Turok if the console had been rewired by a neurotic bashment enthusiast.

EP closer “Never Lonely No More” seems like it’d sound best reverberating off gigantic concrete slabs, preferably somewhere on the edge of the city, with the echoing handclaps that rise to prominence halfway through the track offering temporary respite before the stormy 808 patterns unfurl themselves. Though Wells shows surprising control over a diverse set of sounds for a relative newcomer, it’s the first half of Never Lonely No More that treads into the most engaging territory – without even having to press his (or anyone else’s) ashes into the wax.

A1. Leaving
A2. Searching
B1. Jungle Warrior
B2. Never Lonely No More