Ras G – Back On The Planet 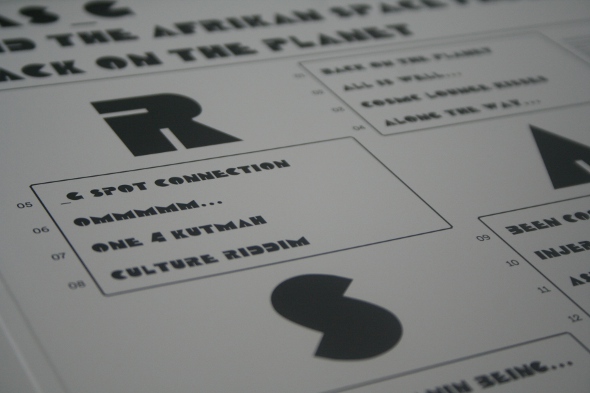 Out of all the Brainfeeder posse, Ras G has always seemed the wildest proposition. The Gaslamp Killer may have the fiery stage presence, FlyLo the gift of accessible experimentalism, Samiyam the knack for granite-weighted grooves, but Ras G can take it further out there with his music than any of them. Empowered by an innate connection to the astral plane on which the likes of Sun Ra communicated, Ras’ music can sometimes be tricky to process, but it’s never short of otherworldly.

Across this latest long-player it feels as though there is a flux at work, pulling more of Ras’ sonic star-gazing into a focused realm of discernible groove while at the same time letting his irrepressible spirit wander free. At moments everything holds together and the vignette makes sense, but there’s always a sense that at any moment the vibe could be flipped on its head. That the jerks and swerves seem less uncomfortable on Back On The Planet suggests that Ras is in some way bringing his music into focus here.

There are some stunning moments that edge close to straight up tracks – not a common trait for a Ras G record. “All Is Well” appears second track in, bringing with it light rolls of percussion and a captivating swathe of synthesisers bleeding into each other to create a wonderfully harmonious bath of sound. Likewise “One 4 Kutmah” steps up with a built in anchor of distorted bass and a crisp boom bap that borders on conventional by Ras standards.

On the whole this is an album still crafted for a distant frontier, but even in more snatched moments such as “Find Ya Self (ANU Wrld)” there is a tangibility in those soothing synth tones that is more instantaneous than the dense barrage of rhythm and noise that Ras often reaches to. Likewise “_G Spot Connection” slips into a dreamy funk that curls itself around your mind without betraying its true leftfield intentions. It’s only on closer inspection that you realise that the track is in fact still as adventurous as anything else on the album, just disguised with a smooth chord progression and a steady rhythm.

There are of course plenty of times when the familiar structures crumble and splinter into real freak-out territory, as on the wondrous sound design of “Asteroid Storm…” with its bleak textural shudders offset by lurid voices. “Along The Way” deals in modal pathways through arrhythmic synth work while lightly tapped timpani tries to hold everything together to only a small measure of success.

Compared to some of the visceral work Ras can most readily be associated with, there is an earthly quality to the 16 curveball offerings that shape up this LP. For a man dedicated to the vision of the Afrikan Space Program, there was clearly an intention with this LP to bring things back to a more grounded purpose. Of course this is still Ras G, an artist so inherently betrothed to the path less travelled that he could never play it straight, but there’s no denying it brings a new level of enjoyment listening to his music when you don’t have to stretch your mind quite so much to do it.