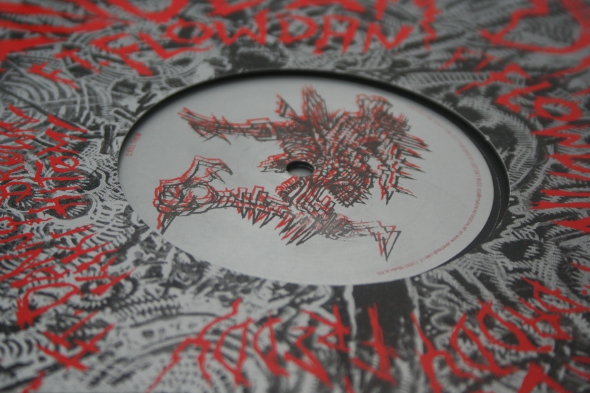 Releases from Blondes, Opal Tapes, Four Tet and The Bug among the best and most notable this week.

Undoubtedly this week’s most anticipated release was Swisher, the second LP from New York duo Blondes. Although it has been freely available to stream on YouTube since it was announced in June, we’ve been eager to get our hands on the double LP itself since then, which expands on their palette of sounds whilst leaving their dreamy qualities intact. Providing the polar opposite of Blondes’ lush sound was the new album from Dubplates & Mastering icon Rashad Becker on PAN, with Traditional Music Of Notional Species Vol. 1 providing some alien and occasionally bleak sound sculptures – pretty much what you’d expect from a man who spends his days working with sound. The big EP meanwhile was the second outing from the Funkinevil combination of FunkinEven and Kyle Hall on Wild Oats, with four funk-drenched cuts that provide the perfect partner for their debut release of moonlight techno.

A similarly adventurous pair of records arrived from the Opal Tapes stable this week, breaking out of the cassette format once again to deliver 12-inch releases from Shapednoise and Yves De May. Both cover expectedly dark sonic terrain, but in markedly different ways. As is to be expected from Repitch Recordings co-founder Shapednoise, Until Human Voices Wake Us plunges head first into the gauzy sonic nether region between techno and industrial sounds, while Yves De May – formerly associated with the Sandwell District label – turns in a more chilling set of tracks drenched in concrete textures on Metrics. Both are of course essential listening.

As ever there was a surplus of hard-edged techno this week, not least from Anthony Parasole, who arrived on Marcel Dettmann’s MDR imprint with the three-track Off The Grid EP. Although the US producer’s appearance on the Berghain resident’s label may seem surprising, the pair are longtime friends, and Parasole’s well-honed take on techno has much in common with the precise approach of Dettmann’s productions. Dettmann himself was as busy as ever, occupying one side of Bleep’s latest Green Series release, with Stroboscopic Artefacts boss Lucy on the flip. Berghain lynchpin Marcel Fengler also popped up remixing Peter Van Hoesen to trippy effect on the third of the artist’s Receiver remix series, but it was the remixes of Tommy Four Seven and Alain’s These Hidden Hands project from Vatican Shadow and Lakker that were among the most visceral of the week (aside from the swiftly sold-out L.I.E.S. appearance of Greg Beato).

This week also saw the much hyped return of Four Tet, whose jungle-referencing “Kool FM” track has been the source of much Twitter debate as to its junglist authenticity, though in reality it comes across like a combination of Joy Orbison’s “BRTHDTT!” and Paul Woolford’s Special Request material with a healthy dose of Kieran Hebden’s organic instrumentation. Complementing it nicely was the latest release from Trevino on The Nothing Special, whose Another Lifetime EP provided a colourful take on techno equally as informed by deep house and Detroit electro.

In the world of bass LuckyMe had everything tied up with a pair of 12-inches from Jacques Greene and Obey City. For those still nostalgic for Greene’s early releases on LuckyMe, the referential artwork for On Your Side will go down particularly well, though the music itself shows just how far he’s come since those early days, with three tracks utilising original vocals from How To Dress Well’s Tom Krell and Oliver Day Soul to accompany his lush take on house music; Obey City’s Champagne Sounds meanwhile delivered some fittingly plush, low-slung beat science filled with live drum swagger which ranks amongst the label’s best. On a housier tip was the latest EP from multi-instrumentalists Archie Pelago, whose Breezy Whey EP provided some of their most driving material to date (without dropping their trademark live instrumentation, however it was The Bug who provided the most visceral low-end of the week, with Filthy featuring Danny Brown and Flowdan, and demonstrating why Kevin Martin is still so revered.

At the outer fringes of sound a reissue of industrial trailblazers Cabaret Voltaire’s Red Mecca and a double LP of Bernard Parmegiani’s Da Natura Sonorum on Editions Mego’s Recollections GRM label provided the week’s most intriguing reissues, but it was down to The Death of Rave and Blackest Ever Black to trump everyone once again, with the serrated noise of Merzbow’s Grand Owl Habitat and the black metal-influences of Raspberry Bulbs’ Deformed Worship providing some of the week’s most extreme sounds.