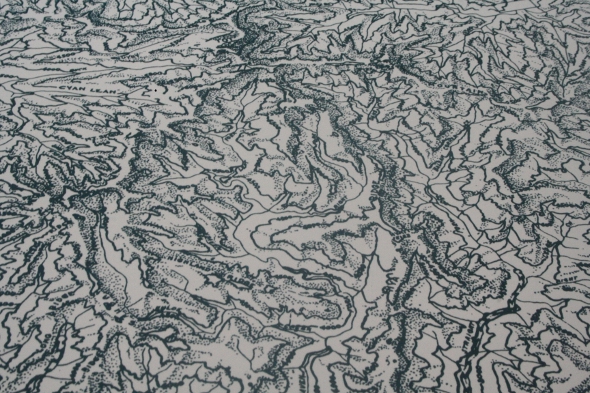 The August record drought proved itself to be in full swing this week, but if anything it was a blessing, allowing us more time to get acquainted with the high ratio of quality releases coming through. We’ve been eager to hear Philadelphia duo _moonraker’s debut for The Trilogy Tapes in full since it was announced several months ago, and this week Lowjit Vagrants arrived sporting some of Will Bankhead’s finest artwork to date. Its cartographic nature is much like the music on the record: jagged, undulating and uneven, with bitcrushed rhythms mingling with ambient synth textures to create some of the most rewarding techno of the year. This week’s big album was the latest long-player from Ras G on Brainfeeder Despite being called Back on the Planet, it’s an album every bit as out-there and intergalactic as previous releases, with a mix of alien electronics, acid-fried jazz, other-wordly ambience, twisted African rhythms and hip-hop beats that fit right into the lineage of Sun Ra.

The week’s best house release came from the consistently on-point Don’t Be Afraid, who dropped the second of their 10-inch releases on the DBA Dubs sublabel. Kelpe may seem an odd choice, but “Monte Verità” is a surprisingly DJ-focused cut whose thick mid-tempo synth construction has all the requisite groove to get any sluggish dancefloor moving. Perhaps even better is the accompanying remix from Detroit’s Kevin Reynolds which performs some unexpected stylistic shifts throughout its eight-minute duration – it’s the kind of thing that has to be heard to be believed. On a similar tip was the second release on Tasteful Nudes, which came from Portuguese duo Sabre. Like their recent W.T. Records 12-inch, Bali offers some warmly rendered house and techno peppered with laconic moans of bass and arresting, slow-release crescendos. It was a similarly rich story on the full Live At Robert Johnson debut from Orson Wells, whose Never Lonely No More was a heartfelt epic filled with falling synthesizer lines, bittersweet melodies, squelchy acid tweaks and stripped back drums.

Those looking for something a little more bracing should check the first release from Sector 7 Sounds, featuring two of Bristol’s new generation of grime-influenced producers. Boofy has already been featured on Bandulu’s recent various artists EP, and on Catch a Body he teams up with Lemzly Dale for a pair of raw grime bangers that should be of great interest to anyone feeling Kahn & Neek’s output of late. Meanwhile Belgian duo GoldFFinch saw last year’s Model EP on Audio Culture remixed by Dutch hero Dexter and rising Finnish duo Femme En Fourre, with deep acid vibes and weighty bass-techno the order of the day. By far the best club music of the week however came from Glasgow’s Dixon Avenue Basement Jams, who put out what was easily one of their label’s highlights to date in DABJ Allstars Vol 1. Featuring the unheralded TX Connect and CT Trax, it contains all manner of jacking ghetto and acid techno styles which allow you to practically taste the sweat dripping from the ceiling.

There was plenty of more cerebral techno to be found this week, with the Klockworks debut of Ukranian producer Etapp Kyle standing out thanks to its subdued tonal melodies and subtle dub textures. Similarly stern was the New York techno of the Point Break duo, whose Sidewalks EP delivered some finely crafted chord driven house, linear 4/4 and broken beats with Drexciyan undertones. However, the big release for fans of deep techno this week was Sushitech’s Bluetrain Retrospective, featuring more dub-techno gold from the vaults of Steve O’ Sullivan.

On the outer fringes Rabih Beaini’s Morphine label came up trumps again with kicking off a retrospective series of US electronic artist Charles Cohen with another Redose release – this time with Beaini contributing two spaced-out reworks of Cohen’s “Dance Of The Spiritcatchers” produced with a Buchla 200series and 808. Offering the ideal companion was a vinyl release featuring highlights from Edward Artemiev’s classic soundtracks for Tarkovsky’s Stalker and The Mirror, their isolating, pastoral melodies essential listening for any fan of otherworldly synthesiser music.