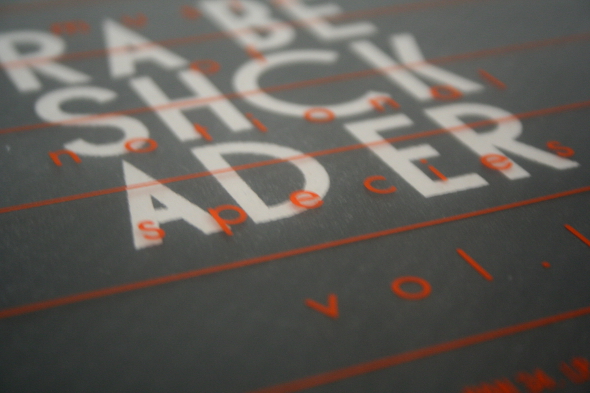 The lot of the mastering engineer is normally an unsung one in music. As the final step between creative inception and release, there are few practitioners of the ‘dark art’ that gain recognition beyond the internal workings of the industry, let alone cross the bridge back into the production camp. Bob Katz, one of the leading authorities on all things mastering, has some amount of notoriety, but really the only name that gets mentioned with any kind of regularity is that of Rashad Becker.

As one of the most prominent engineers at Berlin’s influential (and cryptically named) Dubplates & Mastering, he has become synonymous with the city’s electronic music scene, passing his hands and ears over an incomprehensible amount of modern music. Bar some fleeting appearances, this album for PAN marks Becker’s first proper outing into the world of production, with a long player steeped in the kind of sound design that digs deep under the skin and makes for a decidedly uncomfortable ride. If that sounds unappealing, then it’s not likely you’ll derive much positivity from experiencing Traditional Music Of Notional Species Vol I.

The first section of the album is given over to “Dances”, and the second part “Themes”, although there is a unified sound palette that colours the whole album. What is apparent from the opening strains of “Dances I” is that Becker has placed a great emphasis on crafting a malleable, organic sound that flutters, stretches and contorts with the erratic nature of, well, nature. Like an orchestra of alien insects, the foreground sounds in this uneasy tapestry swell and sustain, fall and trail at the whim of their conductor.

Somewhere in the depths of “Dances II” a rhythm nearly makes itself known, until it’s scuppered by a marching cacophony of mangled accordion, while “Dances IV” skirts around the possibility of melody in what feels like the first tangible anchor in the album. Quite where the split lies between the “Dances” and “Themes” is hard to ascertain, as the same drunken bumblebee provides the lead role throughout the performance, although in the second half of the album it does feel as though the textural drones and hums in the background are clamouring to a more dramatic purpose.

Make no mistake, this is challenging sound that jangles and harries your senses. At times those lilting noises burrow straight through your skull, so ably Becker has crafted them. Where this album differs from many noise efforts is in the constant movement, where the sound never remains static. Imagine it like a cauldron of restless magma, constantly fidgeting and twitching over itself to break beyond the shackles of the audio equipment it is bound to. It’s probably safer for the world that it can’t roam free, as the idea of a physical form to this music is quite unnerving. If music can be that evocative, then it must surely be a triumph.