Raime return to Blackest Ever Black as Moin

The Blackest Ever Black regulars will adopt a different alias for their next EP on the label.

Tom Halstead and Joe Andrews are certainly no strangers to Blackest Ever Black, having been instrumental in Kiran Sande’s decision to start the label in 2010 in order to issue their debut release as Raime; across three EPs and last year’s Quarter Turns Over A Living Line LP, the duo have become one of the label’s core artistic concerns, producing a dark concoction of jungle, ambient and industrial influences that largely mirrors the label’s output as a whole.

News now arrives that the duo are to step outside the Raime moniker for their next release, which sees them adopt the Moin alias for a second time. The music of Moin was first presented on BEB’s Confessions 7-inch series last year on a split release with Pete Swanson, though the identities of those involved was not disclosed at the time. The label are giving little away about the EP besides the fact that it consists of three tracks “recorded with drums, guitar and bass, arranged with effects and sequencer”, but if the sole existing track is anything to go by, doom-laden guitar drones and bursts of feedback are to be expected.

Blackest Ever Black will release Moin EP on September 5. 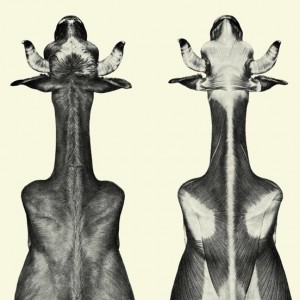