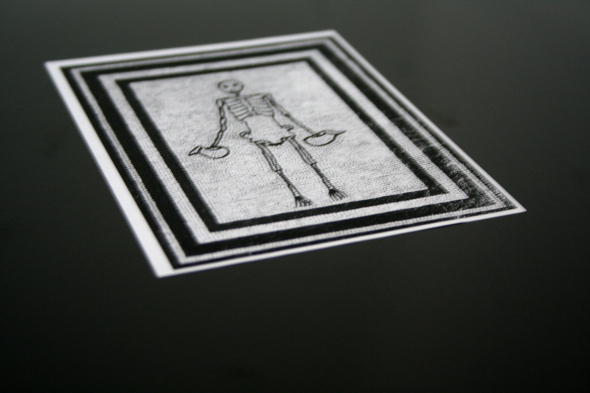 Gunnar Haslam’s existence sprung out of nothingness, which is becoming a common narrative for the ever-growing misfit family of Ron Morelli’s L.I.E.S. label. Emerging with an absence of any biographical information save an obtuse statement on his Facebook page claiming “he came from the border”, there’s not much to go on backstory wise for the anonymous New Yorker. In lieu of any kind of press photo, Haslam seems to prefer a picture of a skeleton holding two wine jugs. Fair enough.

Whether it’s intended as a throwback to the days of white label uncertainty or not, Haslam’s debut double LP does come backed by L.I.E.S’ immaculate track record, so, anonymity or not, it’s a gamble you can put some faith in. Besides, Mimesiak is a debut that no amount of background information could put into context – an album that blends nightmarish meditative mantras with grubby club fare, revealing a little bit more of its shrouded mystique with each listen. While there’s a substantial potential to animate dance floors sprinkled throughout the album, it’s unsettling enough that anyone getting loose to these unkempt tracks will be doing so while shooting paranoid glances across the room.

The track names feed into that sense of unease: “Billowing Black Cloud” begins with a throbbing bass pulse that’s somewhere between an unused Yeezus track and a hardstyle record skipping on the wrong RPM. Gurgling vocal sounds overtop of the track contribute to the track’s storminess, and eventually the two elements coalesce into what a Drexciyan rave might sound like if it took place at the bottom of New York’s murky, garbage-filled Hudson River.

“Scheherazade” is less about the repetitively simple bongo pattern and tambourine shakes at the forefront of the track, and much more about the ominous droning rumbles behind it. While many tracks on Mimesiak are experimental in structure and nature, there’s nothing particularly lo-fi about Haslam’s recording, and one of the elements that makes it an engaging headphone listen is the way that prominent parts of the tracks rise and fall out of your listening range. You’re transfixed on something in the foreground, until you realize what was percolating behind it has crept up and taken over – a pleasantly disorienting experience.

And as far as disorientation goes, it doesn’t get weirder than “He Came From The Border,” which sounds as if you’re sitting in on a slightly sinister psychology experiment – comprised of atonal words looped with stuttered syllables played over and over; barely recognizable, it’s three minutes of expectation-riffing experimentalism. It’s not clear whether there are any still-functional opium dens in Brooklyn, but if there are, it’s likely that you’d find Haslam in attendance on any given afternoon. “B61” might be a reference to the nuclear weapons stockpiled during the Cold War, and its slow-building percussive shuffle certainly crafts a mood that feels like the world could fall apart at any second.

But while Mimesiak has its share of reigned in home-listening tracks, there’s also plenty of sweaty basement-bin bravado here as well. “Cat Highway” wrings every bit of potential emotion and power from its acid lines, which begin as subdued, blossoming slowly into a fireworks display of loopy glory. “Gragnano” lets loose on the percussive workout tip, suggesting that whoever the hell Haslam is, he’s had plenty of experience with layering catchy drum patterns on top of each other. “Mark and Don” pairs bhangra drum patterns with an ambient keyboard line, rounded off by a vibrating bassline, coming across reminiscent of Marcellis’ recent Workshop release. Where Marcellis’ has a knack for making vocal sample choices that pierce into the uncomfortable parts of the mind, Haslam has the ability to do the same in a completely instrumental context. Even in the lighter moments, the mood that Mimesiak expertly paints is a landscape of lurking catastrophe, disembodied threat and unease. We don’t know exactly what border Haslam may have came from, but odds are it’s a pretty dark place.

A1. Just For Me
A2. Billowing Black Cloud
A3. B61
B1. Scheherazade
B2. Anatolia
C1. He Came From The Border
C2. Mark And Don
C3. Gragnano
D1. Cat Superhighway (Version)
D2. Culver Viaduct