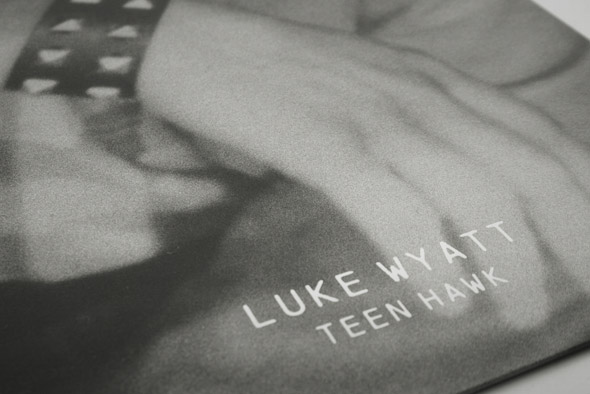 Although it was only last week that his loose reworks of Karen Gwyer’s Needs Continuum were released, this week saw more Luke Wyatt material arriving in the form of Teen Hawk. Mooted for several months now, the LP on the Emotional Response label collects 12 early tracks from the archives of the US producer and video artist; those familiar with his self-confessed “mulch” may be surprised by the relative clarity of the tracks on offer, especially on the beatless analogue terrain of tracks like “Mintwood” and “Kuralt”.

The latest release form UK producer Pye Corner Audio offered an interesting counterpart to Wyatt’s LP; arriving on a one-sided picture disc from Dekorder, Conical Space shares the same queasy analogue quality as Wyatt, but the title track showcases a forward momentum rarely seen from the experimental producer, delivering the kind of pulsating dancefloor track whose slowly unfurling bassline catches you off guard. More densely chugging yet esoteric dance tackle could be found in the latest release from Emotional Response’s Headman-centric Emotional Relish offshoot, with Andy Blake, Scott Fraser and Richard Fearless all offering some typically low-slung cosmically inclined dub house reworks of the producer. Add to that the return of Holy Ghost on DFA with Dumb Disco Ideas, and you’ve got one of the best weeks for disco-leaning synth workouts for some time.

It might seem a stretch to suggest that Ikonika’s new Aerotropolis album on Hyperdub could have been put in much the same category, but as the thick synth-led house of tracks like “Beach Mode” and boogie styles of “Mr Cake” show, her sound has expanded outside of the funky and grime hybrids of her earlier work. Conversely, Girl Unit – one of Night Slugs’ most vivid producers – debuted the Hysterics moniker on their Club Constructions series, one with a functionally mechanical, heady sound far removed from the bright textures of tracks like the producer’s classic “Wut”.

This week’s house releases saw a smattering of titles from established figures going up against some slightly more unknown names. Rush Hour returned to Rick Wilhite’s Vibes: New and Rare compilation from 2010 with an excellent remix disc; Ricardo Miranda turned in a fine boogie-steeped remix of Marcellus Pittman’s “In Due Time”, but it was Detroit hero Andres’ nostalgic chord-driven remix of Wilhite’s own “Analog Love” that provided the killer moment. Move D also delivered the Distant Voices EP on Canada’s Archipel label in collaboration with Montreal-based producer HEAR, combining all kinds of deep simmering textures into something resembling house or techno only in the loosest sense.

Heading up the under the radar producers this week, the ever on-point Dekmantel looked to the sounds of underrated Italian duo Ksoul & Muteoscillator for their latest release. Sounding like a dusty, degraded Marcellus Pittman, the three tracks across the Soul Hell EP are pitched right between the current wave of raw hardware enthusiasts and classic Motor City soul. Employing a similarly lo-fi sound was Cloudface, an artist connected to Vancouver’s Mood Hut collective, who released the Devonian Garden EP on their label this week; those who heard the recent Going Good release from Mood Hut associate Aquarian Foundation will find much to admire amidst the ambient textural swirl and square wave bass, which combined sounds distinctly like a new age take on Fingers Inc. Finally, Idle Hands delivered the full debut of the anonymous Lily. Having previously appeared on Don’t Be Afraid’s Spargel Trax sublabel, the 12-inch included two tracks, one of which,”Trumpets At Dawn”, sounded somwehat like a pitched down Shangaan Electro track.

In the world of techno, Clone’s Jack For Daze delivered one of the more surprising releases of the week, The Artist Formerly Known As 19.454.18.5.25.5.18 traded the stripped back minimal techno of his Horizontal Ground material for a more jacking house sound on Spadesdance, which came complete with remixes from Serge and Tyrell. A pair of pounding remixes of Peter Van Hoesen from Scuba and Token’s Phase were some of the biggest techno tracks this week, arriving on the second in the Receiver series, closely followed by the latest release from the Warm Sounds label, which delivered the raw, crunchy sounds of Battista on the appropriately named Energy Core EP.

A couple of coldwave and synthpop reissues rounded off the week, as Spain’s Domestica label released a much needed reissue of UK duo Nightmoves’ 1981 classic “Transdance”; originally released as a limited 12″ white label in 1981, it found favour on the dance floors of Europe and New York City, yet never really gained the wider exposure it richly deserved, making this lovingly presented 10-inch a must for fans of the era. Coming from a more experimental angle was Minimal Wave’s Earlier / Later, a retrospective look at the music of Belgian group Polyphonic Size. Emerging in 1979, the group were one of mainland Europe’s more enigmatic purveyors of primitive synth pop, and is essential listening for anyone currently captivated by UK producer Powell’s ramshackle beat formations.