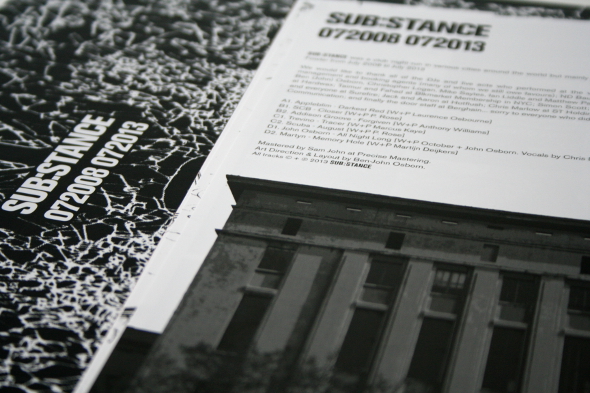 After five years service to Berlin nightlife, time is being called on Sub:Stance, Scuba’s Berghain residency that played a pivotal role in breaking dubstep into the city, reflecting the transitional period when the genre emerged from the UK underground and dutifully splintered into myriad variations and deviations. Whilst not the only representatives of bass weight music in the city, Sub:Stance undoubtedly drew the most attention by setting up shop in the closest thing there is to a techno cathedral, in some ways affirming dubstep as a force to be reckoned with.

Five years on, and the landscape is very different; dubstep as it was then has retreated back to a niche underground scene, whilst the house and techno that has spun off from that original tidal wave of creativity has surged in popularity, in many cases melding into the existing 4/4 framework and injecting it with fractured rhythms and lashings of sub. This compilation makes for a pertinent snapshot of where things have got to now, calling upon artists with long legacies in bass music and winding up as an almost exclusively 4/4 double-pack. Addison Groove makes for something of an exception, opting for an interstellar synth odyssey fitted to a jagged trap-infected beat, but still emblazoned with glacial Detroit chords.

Appleblim enjoys the whole of the A side to himself, and throws down a Chicago-flavoured gauntlet coloured by strung out swathes of synth and dubby effects, including a luxuriant breakdown of swirling notes from a multitude of sources. While his recent Apple Pips release still retained the swing and swagger of his bassy roots, this is an outright diversion into sustained hypnotic groove. Scuba in SCB mode likewise opts for a restrained and linear workout led by a nagging synth line, although it comes as less of a surprise as he continues down the path he has been exploring with this alias since the outset.

Marcus Intalex’s Trevino alias demonstrates the reach house and techno started to have into the drum & bass world as well, and his supple techno-ish side project has been met with a rapturous response. His innate bump is woven into “Tracer”, but even here the dynamics of the track unfurl like all good techno should. The central hook of the track comes from a synth clearly harking back to darker rave days, making for a smart nod to Intalex’s past and cementing it as one of the standout cuts of the compilation.

John Osborn is in more familiar territory, jacking out a no-nonsense acid thumper befitting of his tendencies on his own TANSTAAFL, while Martyn expands on his developing kitchen sink, roughshod house sound. That’s not to say the Dutch producer is over-cooking the contents of his music, but rather creating a unique cauldron of samples to achieve something evocative and driving at the same time. Perhaps fitting given he is the man in charge here, Scuba’s other entry under his fuller title marks the biggest departure from the genesis of Sub:Stance, as crisp, bright 80s synth lines and snappy breakbeats flit around with poppy abandon, a world away from the glacial, deeply textured dubstep he was making when Sub:Stance began.

This compilation makes for an interesting milestone, signaling just how much things have changed and just how quickly it happened. It could be argued that the boundary-testing creativity that dubstep strode forth on has been diminished somewhat, replaced instead with a reappropriation of past tropes with a modern focus. All the tracks here shimmer with a contemporary finish, gritty where it counts whilst ultimately pushing production values forwards, but in truth the ideas are not urgently new ones. Addison Groove and Martyn represent the most wayward offerings here, their chosen paths more distinct against the unstoppable march of house and techno. In many ways it’s unfair to judge these tracks against dubstep, so removed are they from such beginnings, but in the context of a night that represented a significant amount of progress for the genre, it’s hard to shake off such judgement when listening. While the quality never drops throughout Sub:Stance 072008 072013, there are times you’re left craving a little of that unexpected magic that can set electronic music alight.