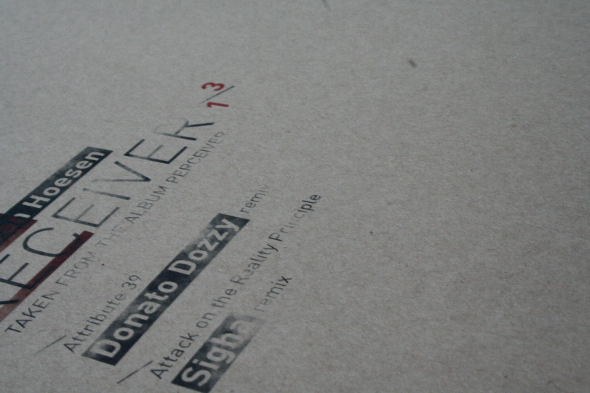 After what seemed like years of non-stop activity, Belgian producer Peter Van Hoesen took a few steps back after releasing his second artist album, Perceiver in 2012. This short hiatus came after a period where Peter had been at the forefront of the European techno vanguard that resonated around underground clubs since the late ’00s.

This withdrawal coincided with the release of Perceiver, which provided a platform for him to put those punishing sub-basslines he had become associated with on hold. As he prepares a new live show, he is also issuing a series of remixes by his contemporaries to bridge the gap. Like Van Hoesen’s own approach to production in recent years, this series of three records varies in style, but the second and third installments are the most dance floor friendly.

Scuba’s SCB edit of “Seven, Green and Black” has echoes of Van Hoesen’s bassy techno, with a malignant low end sparring with shattered glass effects and lean drums. Phase, working under his O guise, is even more forceful with his version of “To Alter a Vector”, as heavy kicks and clattering percussion underscore a gristly acid line. There are other full-on contributions from van Hoesen associates on the other instalments; on the first release, Sigha’s take on “Attack on the Reality Principle” is a bleak, industrial affair with tonal pulses mapping out the direction through a blanket of abstract sound, while Neel’s reshape of “Objects from the Past” is a gradually building, densely filtered techno affair that gets more intense with every few bars.

Operating on a more reduced principle, Marcel Fengler drops the swarming, buzzing riffs of his version of “Inspection in solitude” over a sinewy groove. However, the highlight of the series is Donato Dozzy’s reshape of “Attribute 39”. Unlike the other producers, the Italian stays away from the dance floor to serve up tranced out ambient textures – the perfect antidote to the punishing interpretations his peers deliver.