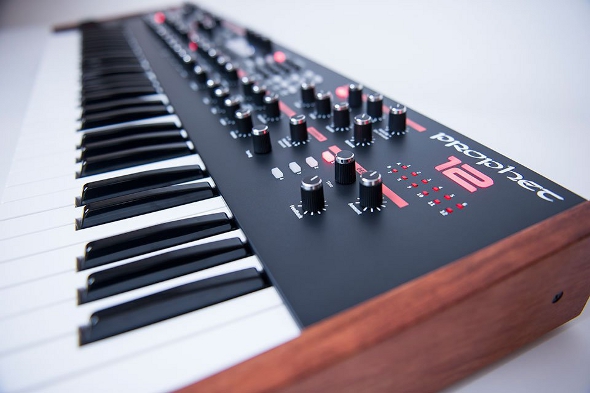 Rob Lee discovers if Dave Smith Instruments’ new flagship synthesizer can live up to the standard set by its predecessors.

Dave Smith Instruments seem to have the knack of designing the kind of synths that everyone wants to own. In recent years they’ve graced us with the powerful Mopho analogue mono synth and its four voice counterpart, the Mopho x4, along with the desktop friendly Tetra and Evolver units and the Tempest analogue drum machine. Launching the long-awaited Prophet 08 a few years ago caused a flurry of excitement, partly due to the fact that Dave Smith developed the original Prophet 5, which was one of the first affordable polyphonic synths presented to the public in the late ’70s; having also developed the MIDI protocol over 30 years ago, it’s no wonder that people take notice when the man designs a new synthesizer.

The fully sized Prophet 12 features 12 voice polyphony, meaning that it can play up to 12 notes simultaneously. It’s a hybrid synth that makes use of both digital and analogue electronics to drive its 792 programs, all organized into four banks of factory patches and four banks of user patches. It’s beautifully designed too; wood panels, a solid metal face plate adorned with knobs, buttons and an OLED display, all underpinned with a five octave keyboard including velocity sensitivity and after touch, finished off with a tasteful dash of red are first to greet the eye on unboxing the Prophet 12 for the first time.

However, despite its shiny exterior, the Prophet 12’s innards are what really count. The four high resolution oscillators at the heart of this machine include saw, square, triangle and sine waves – exactly what you would expect to find on all traditional analogue synths – with white, red and violet noise, and twelve complex waves; all of these waveforms are readily available for all four of the oscillators, maximising the total amount of colours available in the Prophet 12’s sound palette. There is a handy feedback loop with plus or minus control that affords you the ability to tune the feedback before the signal hits the filter, making the sound much more controllable. There are further character shaping tools in the form of drive control, girth (low), air (hi), a “decimator” that reduces the sample rate algorithm and a control called “hack” that reduces bit depth.

For complex modulation possibilities, the Prophet 12 arrives with a mind boggling four LFOs with a seemingly unlimited variety of patch options that can be assigned with the help of the OLED display and navigation knobs and buttons. The arpeggiator can be synced to the LFOs, delay or external MIDI clock with the traditional up, down, up/down, assign (the order in which notes are pressed) and random options. Very solid pitch and modulation wheels are present with two touch sliders that are pressure sensitive, making them another great modulation tool. The levels can also be latched without the need to dive into a menu, making for a another flexible performance option. If your imagination calls for yet further sound design options then you will be pleased to hear that you can layer two separate patches together, or assign a keyboard split to them. Finally there is an assignable and comprehensive delay effect that is also available for modulation.

“But, to really get the most out of this tool, it’s best to delve into its myriad of mind bending controls; to this end the Prophet 12 is a great canvas for your imagination.”

The Prophet 12 is a huge sounding audio design tool with some interesting performance features. A quick perusal of the factory presets is enough to get a handle on its full potential, but for those daunted by sound design on this scale or new to this system of subtractive synthesis, DSI have included some really useful extra tools to ease the workload and assist with those head scratching moments. First, there is a “show” button, that when depressed will help you find the editable parameters of whatever control surface it is that you are interested in. For example, if you want to change the pitch bend range then press the “show” button and move the pitch wheel, and all the relevant parameters will show up in the OLED, ready for you to edit.

The manual is simple to understand and gives logical blow by blow descriptions of the finer points of synthesis, even down to instructions on achieving reverb and modulation effects – such as chorus or flange – using the built in delay unit and the LFOs. There is also a USB port for bi directional MIDI communication, or if you prefer, there are traditional MIDI in, out and through ports on the rear along with two sets of stereo 1/4” outputs, marked A and B, and used for layered sounds. When nothing is plugged into the B outputs, all the layered or split programs are serviced by the A outputs. As soon as you plug in the B outputs the configuration changes and the two signals are split up, logically into A and B outputs. Foot pedals can be connected into the sustain pedal input and there are two further expression pedal inputs for moments when two hands are just not enough, and it is possible to set the function for these controls in global settings.

When all is said and done, the Prophet 12 really is a fully comprehensive sound designing tool. It builds on what was achieved with the Prophet 08 by adding a bigger memory for patches with more oscillators and sub sine wave with complex wave sources and noises that aren’t found on the two oscillator Prophet 08. This new unit loses its predecessor’s 4 x 16 sequencer, but includes more loop-able envelope generators with pressure sensitive sliders, character FX a pre filter feedback loop, stereo distortion, and for users looking for a performance friendly synth, there is a play list mode that helps you organize relevant programs, so you can perform quick patch changes.

With details like ‘slop’ control that emulates the sound of unstable analogue oscillators and FM and AM modulation per oscillator, there isn’t anything quite like the Prophet 12. Part of the reason for this is that, in terms of sound, it manages to retain a certain basic aesthetic that all Dave Smith Instruments’ synths (and Sequential Circuits synths) have; if you only want to use the out of the box presets found on this synth then you won’t be disappointed as there isn’t a single dud sound in the factory bank. But to really get the most out of this tool, it’s best to delve into its myriad of mind bending controls; to this end the Prophet 12 is a great canvas for your imagination.