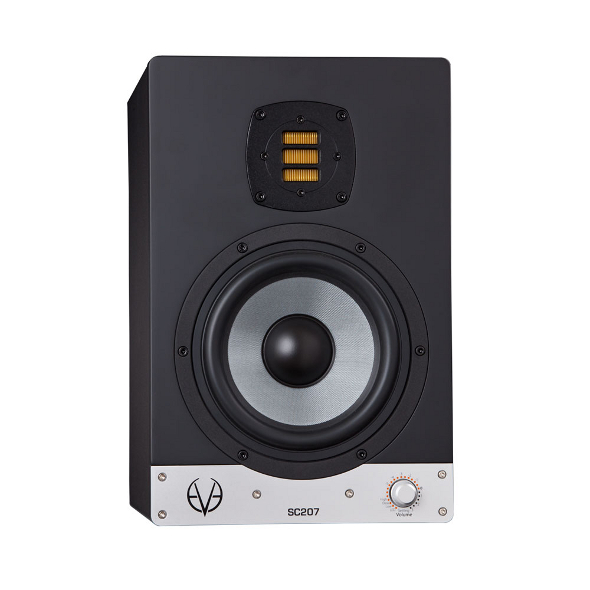 Rob Lee takes a look at the new speakers from the young Berlin-based company which has been causing a stir in the professional studio monitor world.

If passion is one of the most important elements that powers audio and hi-fi companies to success then the future looks bright for the new EVE Audio brand. However, it would be a deception to paint them as total newcomers, as they were born from a parting of the two founders of the well respected ADAM Audio name. Roland Stenz, the electrical engineer who co founded ADAM Audio back in 1999, is the man behind this new venture. In the 1980’s he found himself in the research and development department of an East German broadcast component supplier. When the iron curtain was finally lifted, he started work for a Berlin-based hi-fi company before delving into the world of advanced electronics. With his knowledge, experience and a recent MBA behind him, Roland Stenz is back doing what he does best, and the result of his passion and sheer graft can be found in the form of EVE’s SC207 near field studio monitors.

These monitors from EVE are a two way system, meaning that there is one woofer and one tweeter, in an active design, which negates the need for an external amplifier. They deliver a maximum output of 100 watts in short bursts through a 6.5” woofer and a tweeter that is based on the air motion transformers first used in the 1970’s, also favoured by ADAM Audio. The SC207 makes use of digital signal processing (or DSP) that requires the analogue signal to be converted into digital using highly regarded Burr-Brown AD converters. For precise control there is a single push encoder that allows you to shape the sound of the monitors to fit the room you are working in, with high, low and desk filters that give you the option of boosting or attenuating specific frequencies in 0.5db steps, by a maximum of +3db and -5db (more on this later). This push encoder also doubles as the volume control for each unit with visual feedback coming in the form of LED dots located around the edge of the encoder. The connections around the back include a socket for balanced XLR and an input for unbalanced phono jacks, with no accommodation for 1/4” jacks.

The first thing that strikes you after powering up the SC207s is the overall crispness of the sound. The bottom end stretches into an abyssal 44Hz, which is quite an achievement for a monitor that only houses a 6.5” woofer, and even more surprising as the sound manages to stay even through the low and low mid frequency range with no audible dead spots to be found. To aid the bass definition, EVE have designed a rear bass port that is both large and has rounded edges, helping maintain distortion free bass as you increase the volume. We are told that EVE’s SilverCone woofers are built using a glass fibre coated, honeycomb-like structure – either way the results are impressive. Taking the frequency response above 3000Hz is when the air motion transformer (AMT) tweeters take over, providing defined and accurate reproduction of the high end. Each monitor ships with an optional tweeter guard that is held in place magnetically to protect the sensitive ribbon inside.

“Even though EVE are a relatively new company, they are backed up by a wealth of knowledge and experience, which is evident in these mid range, near field monitors.”

Part of the whole EVE philosophy is to make sure that you are hearing an accurate reproduction of sound which, when mixed, translates with consistency on a variety of speakers or in larger environments. This is where the DSP control becomes useful. EVE have opted to create a digital signal path rather than an analogue one, and with this they have included the single encoder-controlled filters to tailor the sound to the room that you are working in. These speakers are near field monitors and they are ideally suited to home based musicians and producers or post production technicians that are usually found working in small deadened rooms. Because no two spaces are the same, and especially if you work at home in a converted bedroom or similar space, you might feel the need to shape the sound to make sure the surrounding environment isn’t degrading the accuracy of the audio recreation from the monitors.

The low filter will allow you to boost or reduce, +3db or -5db, below 300Hz. The high filter will boost or attenuate above 3000Hz with the desk filter presenting the option to boost by +3db at 80Hz or reduce a narrow bandwidth at 170Hz by -5db, allowing you to correct any problems the surrounding acoustics may cause to the sound. In addition, there is an LED mode that allows you to choose four different ways in which the LEDs represent levels. Levels can be monitored using the outer ring of LED points and the stencilled numbers around the edge with a fully bright continuous ring, a bright point, in which only the indicated level point is lit, a dimly lit continuous ring or a dimly lit, level only point.

Thankfully, there is no need to save your settings as this is done automatically every time you power down the monitors. On powering them up again, the SC207s will remember how the speakers were configured before they were turned off. If there is a single criticism of this system, it lies in the fact that it does feel like it would be easy to inadvertently change a setting by clumsily knocking the push encoder unintentionally. However, EVE have countered this potential problem by designing DIP switches, located at the rear of the speaker, that lock the volume and filter settings. There are actually three DIP switches, though as yet its not completely clear what the third one is designed for.

Even though EVE are a relatively new company, they are backed up by a wealth of knowledge and experience, which is evident in these mid range, near field monitors. The SC207s are made for professional use, and are ideal for critical listening because, to put it simply, they will show up poorly mixed work – which is exactly what is required from monitors in this class. Along with their professional credentials comes a price tag to match, and although they might not fit everyone’s pocket, they will certainly help raise the game of serious amateurs, should they decide to bite the bullet and pay the extra. Comparable alternatives come in the form of A7Xs from ADAM Audio, which feature an analogue signal path, albeit with less control over the shape of the sound, or the 8030BPM model from Genelec that have a slightly narrower frequency response. However, for solid professional monitoring that includes an even sound from 44Hz all the way to 21kHz, even at low volume, with a superb stereo image, the SC207s from EVE could be the game changing part of your studio that is worth the investment.