Hot on the heels of the latest Ableton Live update, we are treated to the first piece of hardware fully designed by, and for, Ableton. Rob Lee finds out what’s causing all the excitement.

With a marketplace crowded with USB MIDI controllers of varying designs, and crafted for an infinite number of purposes, you might think that the joyous response to the release of Ableton’s Push is somewhat unmeasured. Both Native Instruments and Akai Professional have comprehensive production controllers in the shape of Maschine and MPC Renaissance respectively, and people have been arguing over the merits of both since they hit the shelves. But have they been missing the main point? Isn’t the hardware only as good as the software that it controls?

As far as music production software goes, Ableton has been around for some time, and its popularity just keeps growing, its merits argued over as vociferously as the hardware. Compared to Logic and Pro Tools, people tend to dislike its workflow over end mixdown quality, whilst Ableton acolytes defend its speed of workflow and ingenious design features which allow users to improvise complete tracks in real time. Although Ableton received a dedicated control surface in the form of the Akai APC40 in 2009, it makes sense that at some point there would be a dedicated Ableton branded control surface.

The Push unit itself is a surprisingly weighty slab of rubber and metal, filled with an 8×8 matrix of stiff rubberised pads and framed by an array of buttons, a decently sized LCD and a bank of touch sensitive knobs. Concern over the weight of the unit itself soon disappears when in use; it feels very solid, stable and unlikely to be accidentally pushed of a work surface. It connects to your computer with a single USB cable from which it can also be powered, though there is an alternative 9V AC power port if you would prefer to give your computer a bit of a rest in the bus power department. Finishing off the back plate of its simple design are two ¼” footswitch ports.

After connecting the hardware and firing up Live 9 (which is required for Push to work) you can begin to get to grips with the design flow. Like the software, Push has two main modes; note view, which deals with the creation of clips, and session view, which organises those clips into an arrangement. Starting in note view and browsing for sounds within Live 9 is done using the LCD display, knobs and rubber button pads. One of the intelligent designs of this unit is the way the pads interact with differing instruments. For example, if you load a drum rack, the pads are configured so that the bottom left quadrant of 16 pads allows you to play or select the drum sounds in that rack, using the touch strip to scroll up and down the drum grid. If you are not a confident finger drummer then the top 32 pads double as a step sequencer, similar in style to those found on modular sequencers or old drum machines such as the Roland TR-808, only with 32 steps rather than 16. For added control over the length of your drum clips, the bottom right quadrant gives you those options, along with the ever-useful “double” button.

On choosing an instrument rack the pad configuration changes again, this time into a very curious layout designed to ease note selection and performance. The touch sensitive pads are of the multi coloured backlit variety, and give clear user feedback; in the case of the instrument rack, they show all of the octave root notes in blue, with the other notes in your chosen key in white. Being a notes kind of person, this writer was extremely sceptical of this kind of simplified design at first. It claims that by choosing the key and mode (scale type i.e. major/minor) there are no wrong notes on the grid.

“If you are a DJ or a musician using Ableton, then the Push hardware can facilitate anything you can think of doing with the software”

Although this option may upset those purists who still believe in traditional notions of music theory and harmony, Ableton have also included a normal/chromatic button that changes the configuration to include the “not in key” notes that appear unlit on the grid. It’s this pitch layout design that makes Push feel like an instrument. The design of the octaves is quite ingenious and it certainly does make you choose your notes more carefully, along with retaining the possibility of a hear it and play it with a type of creativity often associated with jazz improvisation. Technically, it is quite a challenge to play the pads in this manner, but changing the sensitivity curve of the velocity or aftertouch certainly helps. As an example of how low this can be set, it was noted that when the touch sensitivity curve is low enough, even a ground hum would set off the pads. As to whether this complex layout is more efficient than a traditional keyboard is uncertain, but it probably isn’t as all encompassing as a piano layout (even without the quarter notes).

The good points of this contemporary design however are that non musicians have less to fear, while seasoned musicians have a new way of getting out of a rut by approaching pitch performances in a new way. It also puts the concept of more exotic modes such as Mixolydian, Phrygian and Dorian modes right under the noses of those that might only have ever heard of major and minor. Thankfully, the way keys can be chosen is organised in a harmonically sensible way (circle of 5ths) making it familiar to people who are used to the concept of mixing in key. Together with the possibility of recording automated parameter changes on a clip level helped along by the knobs and buttons, the Push’s capabilities in this area add up to something more than first meets the eye. However, if you’re really not convinced by the pitch note mode, then it’s fully possible to add a keyboard if this doesn’t work for you. 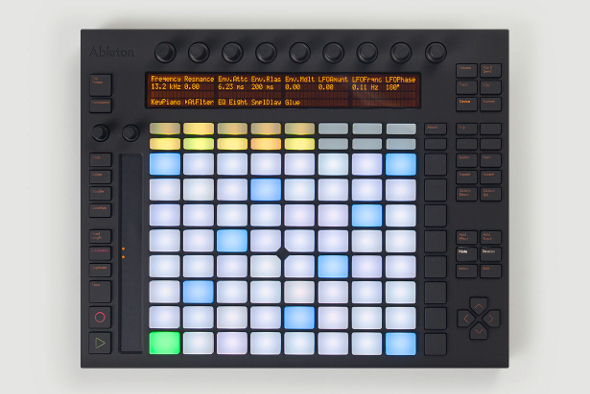 The session view is perhaps the mode that most users of Ableton will know, especially if they have used pads to launch clips before; the multi coloured backlit pads reflect the colour of clips in your scenes thus facilitating them into a complete arrangement. Ableton have created this controller for anyone who wants to be creative in Live 9 without the need to be constantly looking at the computer screen. However, due to the clever design of the instrument mode layout, the Push hardware is leaning away from standard controller territory and more into the area of what could be described as an instrument. Its smart mapping for drum or instrument programming is well thought out, and even if you’re not a fan of the instrument note view, it’s hard to fault the drum programming layout.

Having all of the functionality of Ableton in one unit is a plus but if you want to change quickly between session mode and note mode for the purpose of changing something on the fly in your arrangement then it can be a bit of an uncomfortable experience, although it is possible to get around this by pairing the Push in note mode with another controller (such as Novation’s Launchpad) taking care of the clip launching sessions. Thankfully the design does allow you to change the signal paths in the software directly from the hardware. Another considerable oversight is that it isn’t possible to browse your hard drive directly from the unit, something which would have been a handy way of importing loops or one hit sounds without having to go back into your computer; however, this seems like something that could be easily rectified in a future firmware update, along with possibly allowing for control over input routing and a visual input gain meter.

With the Push controller Ableton have added some serious weight to their latest Live upgrade. The pads have a solid feel and it comes as no surprise that Akai are behind the manufacture of the unit. In general the unit does what it has set out to do, which is to facilitate every aspect of music creation in an efficient manner. Although the Maschine and MPC Renaissance have already got a head start on the Push, Ableton’s offering stands up very well; although by no means perfect, it builds on the solid foundation that the software has provided over the years, with a cleverly implemented input solution which elevates the Push above the lowly controller, and into the world of the instrument. If you are a DJ or a musician using Ableton, then the Push hardware can facilitate anything you can think of doing with the software, from browsing sound effects for any of the channel or sends, launching or creating clips, editing or recording automation, tweaking volume, or editing device parameters. As to whether users will be ditching their keyboards for the Push remains to be seen, but its innovative design is quite unlike anything else on the market.