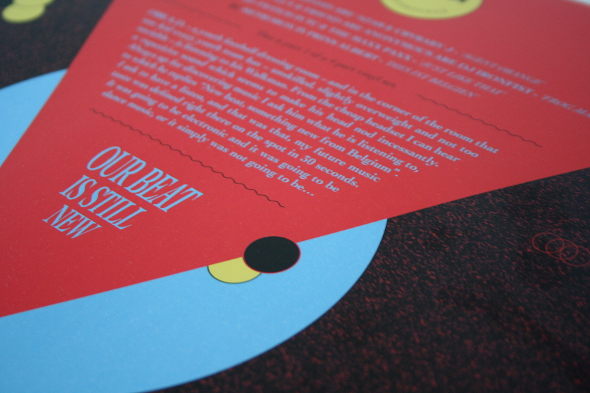 “There is no such thing as tech house, there is no such thing as deep house, there is simply house music, good or bad.” It’s debatable whether this statement on the front page of the We Play House website from founder Red D is true or not, but it certainly makes a music journalist’s job pretty redundant. Fortunately, despite the ‘one-size-fits-all’ approach that We Play House utilize in the above blurb, it appears that they’re also not opposed to paying homage to a certain genre or time period. Thus we have the first in a series of Our Beat Is Still New releases that pay tribute to Belgian New Beat, the late 80s Belgian acid house and post-industrial rave tinged productions that provided a tweaked out, sexually explicit warehouse alternative to the more mainstream UK’s Eurobeat. Across four planned 12” releases, the label will call on some of their New Beat loving contemporaries, with this inaugural set featuring Juju & Jordash, JD Twitch, Metrobox and the promise of a tantalizing famous anonymous producer.

Despite one of the prominent Google search results for “Belgian New Beat” being ‘Shittiest Music Genre Ever?’ the fluidity with which the four tracks tackle the genre is perspective-shifting in the best possible way. As much as Our Beat Is Still New is a disorienting acid flashback back to the late 80s, it’s also a sign of how many strides have been taken since then. Take standout a-side “Agent Orange,” which finds Juju and Jordash using the Azab & Crybaby J alias to lay down some meaty, wind-swept acid percolations while tinkling percussion softens the edge of the acid workout. Reminiscent of Samo DJ’s “Leggo” release on L.I.E.S. BLK earlier in the year, it drops a few foreign monologues in the track amongst the loopy, relentless bassline. Even though it sounds like something that might accompany a cheap European slasher film, there’s something effervescent about “Agent Orange” that keeps the mood much lighter than the duo’s recent second Golem release for Golf Channel.

DJ Ironfist’s “Frog March” comes from a ‘big name UK house producer and friend’, and those wishing to identify who exactly is behind the track will have to strain their ears pretty hard to detect any familiarity whatsoever – genre-wise, this track is in a world of its own. Borrowing equal measures from Green Velvet’s “Flash” and one of Jam City’s more rigid club construction tracks, “Frog March” expertly teases up a bigger build-up than the sum of its parts, perhaps something to do with the sound of a frenzied crowd clapping together in unison thrumming throughout the track. Halfway through, when a classic house piano line kicks in amongst the sound of snapping cameras and wailing electric guitar, there’s a moment of payoff that’s guaranteed to tug at the heartstrings of New Beat naysayers.

On the flip, Metrobox utilizes the Prins Albert moniker for “Dies Ist Belgian”, a heaping serving of spaced out cosmic disco house with an obligatory (?) moaning female sound effect and some Rammstein-esque guttural spoken word narration. It’s not until a few minutes in when the syncopated percussive folds overtop itself and synchs the track into close-your-eyes-and-drift-into-the-void territory. Still, it’s a reigned-in take on New Beat’s balls to the wall zaniness, which may leave some wanting more. Fortunately, JD Twitch’s appearance under the TC & The Maxx Paxx persona delivers this in spades with “Just Like That”  – layering on a pounding keyboard lines injected with amphetamines and constricting the whole thing in a tightly wound acid coil. If you missed the New Beat phenomenon the first time around, your interpretation of Our Beat Is Still New may be accompanied by a bit of confusion, but there are enough threads of acid, techno, house and electro coursing through the veins of this first selection to keep the offerings recognizable and versatile enough to suit the needs of a dance floor, this generation or the one before it.