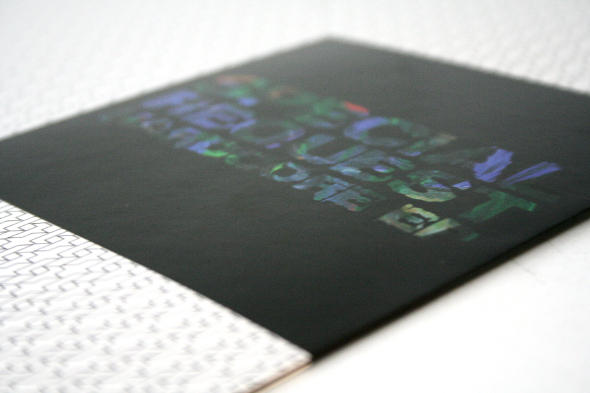 Along with the resurgent love of acid house and analogue production, it’s been hard to miss the dirty roll of classic jungle lurking around the edges of more bass-weighted productions of late. Producers such as Tessela have been forthright in their appropriation of amen breaks, snare rushes and icy pads as a means of injecting that unmistakable energy into their productions, while it’s really not that uncommon to hear straight-up house tracks with subtle splashes of the think break in amongst the 4/4 framework.

Paul Woolford likewise has indulged his love of early breakbeat sounds with this lauded Special Request venture, which has afforded the artist a fresh perspective after a long-standing career in more continental parts of the tech house scene. You can’t doubt the sincerity of Woolford’s new project, even if techniques such as resampling tracks via FM transmitters for that pirate radio finish may come off a little overblown. There’s just no faking the kind of endorphin rush that a properly delivered jungle cut can deliver, and that’s exactly what you get on the impeccable “Broken Dreams”, one of the original tracks on Woolford’s first outing for Houndstooth.

The beat actually sounds a little tepid when “Broken Dreams” kicks off on a fairly rudimentary breaks motif, although the bass stabs come pulsing through with the promise of more to come. The warning shot snare rush that comes ripping in before the track starts in earnest tells you all you need to know, and so begins a ripped demonstration of breakbeat mangling. The chops have a more modern feel to them, perhaps through the crisp precision afforded by contemporary production, but it’s a necessary addition to bring more than simple revivalism to the table and it works a treat. Regardless, in the heat of the dance as limbs have started flailing, no-one’s going to be worrying about the nature of the edit but rather how to jerk their body in response to it.

There’s also a pleasing irreverence that accompanied the more fun aspects of jungle, chucking in samples and external drum licks with cheeky abandon, while the extravagant breakdowns, interludes and filter heavy wig-outs surge with the fearsome intent of the good old days. “Wall To Wall”, conversely, is more concerned with taking whispers of those rave signifiers and bringing them into a 4/4 context in that more modern approach of melding genres. It’s a dirty and disheveled techno sound that emerges, full of leaden bass and rasping drums, while the vocal sample comes in a distorted and finely sliced form. It’s largely reminiscent of the Joy O and Boddika approach to four to the floor, dark and brooding but utterly vicious at the same time, and it’s certain to set the darker edge of bigger clubs alight.

The remixes on this EP are certainly of note, interestingly reworking tracks not actually on this 12”. Anthony Naples has been enlisted to revisit previous Special Request jam “Mindwash”, delving into his sometimes-revealed grittier side for a murky excursion that dutifully rides the breakbeats of the original but purposefully drives them into a mud bath so as to submerge the brittle drums. Meanwhile Woolford’s piercing arpeggio has been equally encrusted, and with the mournful chords draped across the top Naples successfully crafts a remix as obtuse as it is captivating. Lee Gamble makes for a logical addition to the package, and he gets the hitherto unreleased “Capsules” to mess with. Considering the jungle ties of his work to date, Woolford’s music is in safe hands and he wastes no time in getting into a gloriously dubby head space. It’s a languid version that unfolds, focused around a shuddering chord and the decay that emanates from it, while delicate cymbals sneak in to the mix and sub-bass occasionally pokes its head above the audible parapet. The switch up half way through is a compelling one, unexpectedly dropping the aforementioned chord and departing into an even more haunting place populated by a lone wail and a fearful pad, a chilling exercise that continues for the rest of the track.

Considering the scattered compiling of the release, the remixes seem to sit in stark contrast to Woolford’s original tracks, but then this release in many ways seems to serve as a precursor to the Special Request long player that will emerge on Houndstooth later in the year. There is a feeling that perhaps Woolford is still working out where he wants to take this project, excited by the prospect of making rugged, hardcore-rooted tracks for the dance and hence tackling all manner of avenues within that remit. Be that as it may, tracks such as these are better judged on their solitary merits rather than as a grouped release, and both “Wall To Wall” and “Broken Dreams” fit their respective bills with all the guts and girth that was surely intended of them.