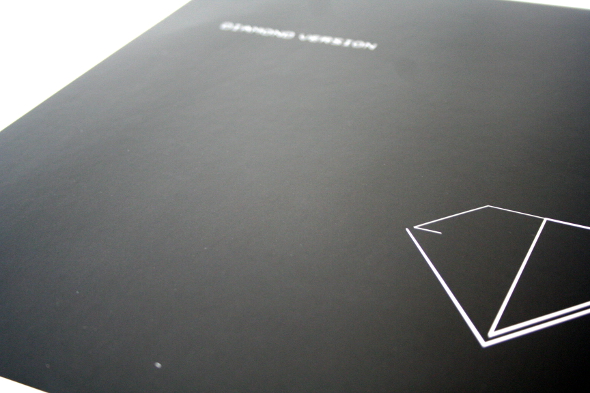 Is there any more obvious proof of techno’s enduring appeal than the Diamond Version series? A collaboration between Raster Noton founders Carsten Nicolai and Olaf Bender, it transposes their abstractions from the living room to the dance floor, and in so doing opens up a new chapter for techno music. Admittedly, there has been an awful lot of sub-standard abstract and industrial focused garbage released in the past three years, but this criticism could just as easily be levelled at all of techno and house music’s sub-genres. For example, it would not be difficult to find a swathe of poor loop techno or bland minimal house.

But back to the Raster Noton duo; the main reason why Diamond Version is such a worthwhile addendum to techno’s canon is because it doesn’t sound like the norm. That’s not to suggest that EP 5 exists in a vacuum, but has anyone else noticed that behind the relentless broken beats and subsonic blips of “The Future of Memory” there lurks a hook that makes it sound like a primal, droning version of Daft Punk’s “Music”?

“Operate At Your Optimum” inhabits a similar space, minus the catchy riff. Stripped to just a few elements, its lumbering drums pile up against one another as great blasts of fuzzy noise collide with depth charge bass licks. It only really does this music justice to be heard at volumes that are as powerful as its low end tones – as opposed to the laptop speakers that many will stream it on – and for that reason EP 5 inhabits a strange place, techno that also works as live music in the truest sense.

And yet if there are any doubts that EP 5 twitches and crackles with an unpredictability and rawness, then check “Sense & Simplicity” or “Make Believe”. Both feature a humming  sound that could be coming from a live mic left lying on a studio floor while glitchy percussive slivers and bursts of noise crawl like diseased rodents over the duo’s jittery, pared back drums and electronic rhythms. The end results are tracks that make reference to the past but which drag these influences kicking and screaming into a new world of possibilities. For that reason, EP5 embodies techno as much as Juan Atkins, Jeff Mills and Rob Hood before them.

1. The Future Of Memory
2. Operate At Your Optimum
3. Sense & Simplicity
4. Make Believe