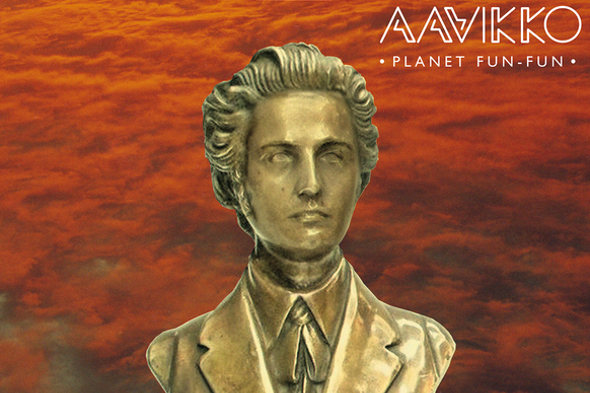 There is something undeniably creepy about a place called Planet Fun-Fun. A land of cheesy rollercoasters, broken down rides and malicious clowns might come to mind. It was originally the name of a Finnish Amusement park of the 90s, and Aavikko have taken the name for their latest spaced-out synth pop album.

Coming together in Siilinjärvi, a small city in eastern Finland, Aavikko have been making music for quite some time, since 1995 in fact! This is their twelfth release of a productive musical career, which includes past collaborations with German electronic wizard Felix Kubin in their back-catalogue. Aavikko have been involved in the local music scene over the years, with drummer Tomi Leppänenas playing with bands Circle, Pharaoh Overlord and K-X-P.

As the name of their new album might suggest, Planet Fun-Fun never shies from the bizarre.  It is an album of off-kilter synths and disco nostalgia. Aavikko brand their approach as “muysic,” the words music and mystic merged together, exploring the paranormal through left-field electronics and addictive alien beats. The record starts with “Machu Picchu”, a synth pilgrimage that takes the listener on a trek beyond the ancient Inca ruin to the infinite bounds of space. While a cosmic theme sticks, the tunes quickly oscillate from epic jams to cringeworthy crescendos. It must be said that this band are not afraid to fully indulge in over-the-top cheese, and this can especially be seen in the title track along with “CCCP vs.USA” which seems to be a Moroder tribute. This catchy cosmic-pop excursion goes a little too far and makes for one of the weaker tracks on the album. All is forgiven by heftier sonic offerings that proceed.

The sounds of “Mekanik Man” keep things interesting, with an experimental playfulness that is sometimes reminiscent of Add N to (x)’s Avant Hard LP. 80s horror synths shine through in the track “Viimeinen Gladiaattori,” stirring up thoughts of spine-chilling graveyards and hopeless robot love. It is an ode to Aavikko’s darker side, with eerie electronics and wailing guitars providing no solace from impending gloom. The aptly named final track “Friendship” eliminates any prior feelings of distress; it’s a wacky culmination of sounds that one might find on a robotic assembly line or in an old school video game. A carefree ditty with a jovial pace which sees Aavikko shun the dark spirits and put faith in the future. It concludes an odyssey through infinite time and space… or perhaps just a rusty old ride round a Finnish amusement park?