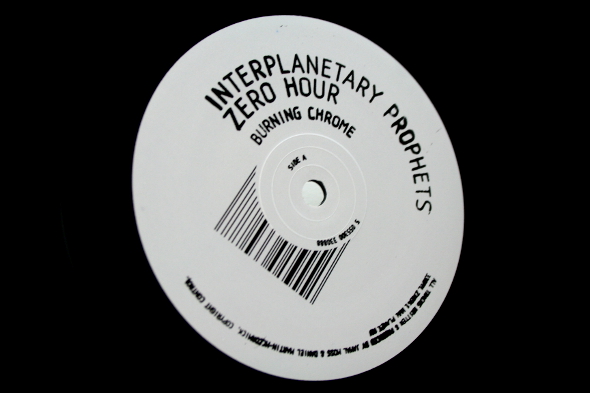 Jamal Moss has been especially busy recently. Last month saw the release of The Universe Next Door, the latest addition to his Music From Mathematics CDR series. So far in July Moss has been responsible for the Electronic Belt EP, out on Luke ‘Helm’ Younger’s Alter, along with a return to Paul Du Lac’s BioRhythm label for a second 12” as The Sun God. Further material is due on Machine Dreaming. Add to that the continual mining of his Somuchnoise2beheard Soundbook and an increasingly busy live itinerary, and it can be assumed that the Mathematics boss is in one of the most fertile phases of his fantastically productive career.

Moss’s latest project Interplanetary Prophets is a collaboration with Daniel Martin McCormick, better known as Ital. Having been invited to perform together under the moniker at last year’s Unsound festival in Krakow, Zero Hour is the first recorded fruits of the pair’s work. The three tracks here are spacious and ‘produced’ in a way that much of Moss’s solo work is not, but if you were expecting a new avant-techno iteration of “Ital’s Theme” you will, unsurprisingly, be disappointed.

Zero Hour is certainly closer to a Hieroglyphic Being record than it is to anything on 100% Silk, but Interplanetary Prophets feels like something genuinely new for both artists, as if they have used the points of overlap in their previous work as a jumping off point for fresh explorations of cosmic techno’s burgeoning hinterlands. You can hear each of the bristles that constitute the broad brushes with which this strung out trio of productions has been made. The crackling atmosphere has been roughly daubed, and onto it has been affixed cryptic, abstruse ornamentation.

On opener “Burning Chrome” there is a sense of melody just out of reach, moving in concentric circles somewhere on the track’s periphery. The kick, which occasionally lurches into disorienting triplets, acts as a listing anchor about which a clutch of mechanical filigree orbits. Much of it appears only once and even then fleetingly. Around the eight minute mark the pads suddenly erupt into obstreperous melodicism, only for this to vanish just as quickly as it appeared. The figure returns later, but now it feels unstable, distended, as if the circuitry is quickly expanding out of itself.

“Zero Hour” dials back the chaos in favour of war drum percussion and pendulous squawks, providing a queasy bed for Moss’s incantatory vocals. “Seconds are moving, minutes are slow. Tick, tock” he intones. Moss’s afro futurism is in full effect as he plays the eschatological mystic, cosmic enough to justify the duo’s name. Closer “Running Out Of Time” is a more freewheeling affair, forgoing beats altogether. The end-of-days theme is again prevalent here, but it is also the track on which some warped sense of melody is most clearly discernible. A glistening synth line flits around, falling over itself, constantly threatening to coalesce into something else, but never quite achieving it.

This is, of course, machine music – but it is a machine of Moss and McCormick’s own making, and that seems to have some self-generating life of its own; a contraption that fits in somewhere between Stargate and Heath Robinson. There is a sense, especially on “Burning Chrome”, that there is a vast reservoir of this stuff, and that this is simply a toe-sized dip in it. It pushes the 14 minute mark, but the track seems to fade just as it’s really getting going, lurching from unsteadiness into outright crisis. The machine will continue to rattle on in perpetuity, it seems, and we’ve just glimpsed a brief section of its life. With luck, Moss and McCormick will give us a further glimpse into the engine room before too long.

A1. Burning Chrome
B1. Zero Hour
B2. Running Out Of Time