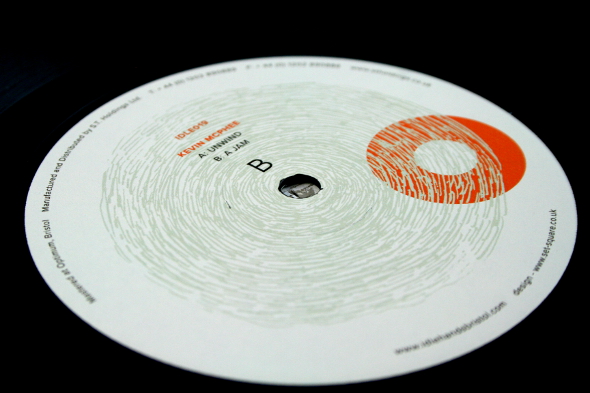 If you’re a resident of Toronto, you may have caught Kevin McPhee’s silhouette in the near pitch-black concrete rooms of the barely-promoted, David Patterson and Michael Krochak organized How Does It Make You Feel party, whose minimalist website has a nail superimposed over the page as you scroll down, giving the viewer the feeling of penetrating through each image you pass. Even though it lacks text, or any other details, the images displayed on the How Does It Make You Feel page provide a decent snapshot of McPhee’s influences: A book entitled Theories of Anxiety, the ominous garden shears from Black Flag’s Everything Went Black, brutalist grey architectural structures, a skyline streaked by storm clouds.

But while all this imagery suggests a certain degree of seriousness, McPhee’s too well-rounded to only solely dwell in the realm of head-down techno gloom. Instead, the young Canadian has likely been moreso defined by his eclectic output over the past few years, with releases on [NakedLunch], Brainmath, and WNCL Recordings showing a diverse range of techno, house and dubstep interpolations. Even more impressive is the way that every genre he lays his hands on seems to fit like a glove, which is also why his latest release on Idle Hands is such an unexpected pleasure – it’s a versatile exploration of sounds that diverge from his dubstep beginnings – looking instead to trashy disco and Jersey leaning garage funk, and creating his most effortlessly dancefloor friendly release to date.

These influences eke through on “Unwind”, which shows McPhee loosening up as he manipulates a looped, staccato horn belting out some broken notes alongside a loopy drum line reminiscent of Smith n’ Hack’s unstoppable percussive rigour on their classic white label remix of Herbert’s “Moving Like A Train”. Some of McPhee’s most floor-friendly work has made prominent use of wailing vocal cuts-  “Who Loves You” on RAMP recordings was notable for it’s Stevie-Wonder referencing, melancholy tinged vocals, and “Do” on last fall’s In Circles EP incorporated hip hop ad-libs amongst McPhee’s plonky percussion. Maybe his most notable use of jarring vocal work happens on the triple-X rated, porn-sampling, Dear-God-did-I-just-hear-what-I-think-I-heard lines dropped in Gerry Read collaboration “Demolition Man”, which, for decency’s sake, will not be repeated here. “Unwind” holds its own against McPhee’s other clever uses of vocal integration, as the wailing repetition of the track’s title taking on a siren-esque quality that’s simple but transfixing – it’s laced with the same bumping hypnotic quality as classic house staples like Hard Drive’s “Deep Inside”.

But there’s more going on than straightforward body-jacking vibes, as “Unwind” showcases another undisplayed side of McPhee’s productions: A bit of sensitivity. When the disco-loop fervour of “Unwind” reaches the halfway point, the stabs and vocals cut out, leaving a minute or so for a gorgeously arranged organ solo to take prominence. Another softer voice rises to the top of the track, harmonizing with the sudden twinkling piano and barely-there string section that sneak into the climax – and it’s that moment that “Unwind” really clicks: It feels like one of the most classically stirring moments that McPhee’s constructed yet – jumbling disco, house, and garage idioms into something surprisingly anthemic.

“A Jam” takes a nod from 2-step, with sustained synth notes holding the track in a perpetual state of tension as clacking percussion patterns stumble into each other in disorderly unison. Those familiar with Dave Quam’s work under the Massacooramaan alias on Fade To Mind might hear familiar sounds on McPhee’s bass-work in “A Jam” – tossing little barbed wobbles into the track like they’re fire flowers being spit out the mouth of the protagonist of an old NES game, McPhee wields unexpected bursts of low-end sound in a similarly exciting fashion, inserting a little bit of dubstep into the track without resorting to old clichés or predictable drops.

McPhee’s been vocal about his desire to continue approaching new styles of music – in a Sonic Router interview from 2011, he admits “whether it be jazz, folk, or ambient music, I’ve learned that there exists merits to all genres, it’s just a matter of being able to push aside your initial inhibitions to get at them.” Unwind / A Jam may not be territory that his future productions linger in for much longer, but his track record shows that McPhee can easily do justice to whatever’s next.