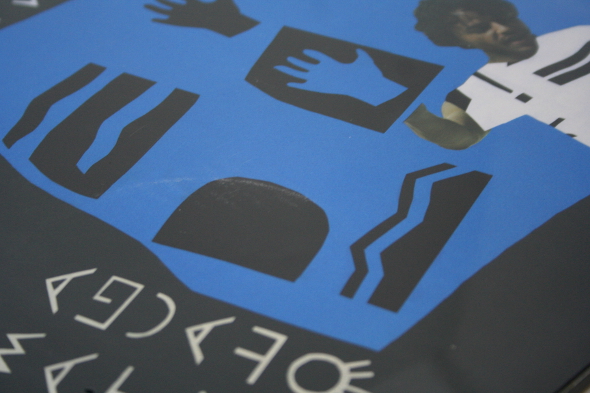 At the start of the year Matias Aguayo spent a month in a Colombian mountain town, learning about cumbia. Originally courtship music, first materialising on the Caribbean coast of colonial Colombia, cumbia gradually spread through the country’s urban centres, being steadily refined as it travelled. Today it is one of the world’s most popular music forms. The Visitor took some five years to make, but in truth Aguayo’s month in the mountains is the most important factor in its creation. At heart this is a cumbia record; an album in thrall to the seesawing kineticism of that lurching rhythm, fascinated by its dynamic potential.

But The Visitor also represents the next logical step for Aguayo’s Cómeme label – a truly global imprint which, over the course of releases with artists like Alejandro Paz and Philipp Gorbachev, both of whom appear on the record, alongside a host of the label’s other signings, has recently been exploring the darkly joyful interstice between ‘outernational’ and Western dance floors. On 2009’s Ay Ay Ay, and increasingly through his work with Cómeme, Aguayo self-consciously jettisoned his minimalist past in favour of festive post-modernism, kicking against what he sees as techno’s staidness in favour of anatomised carnival soundtracks delivered askance.

The Visitor keeps the street party aesthetic intact but explodes it even further. It is a set of spectral, skeletal versions of Hispanic American party music, with the joy extracted and undefinable menace injected in its place. There is nothing straightforwardly good-times about these tracks. Indeed, the title of “Una Fiesta Differente” sums up the mood of both The Visitor and of Cómeme quite nicely: it’s a party, but not of the sort with which we might be familiar. That track also handily instantiates Aguayo’s approach. Cadaverous, haunted house beats, seemingly constructed from Casio presets, provide an obstinate backdrop to Chilean star Jorge Gonzalez’s incantatory vocals. It’s at once playful and ominous – comically serious, and seriously comical.

On “Llego El Don” the presets return, but here they are augmented by high-attack bass of the sort that seems to mimic the string vibrations of an upright instrument. It vies for space with tinny, comedy snare hits, again spidering around the thin line separating buffoonery from the funereal. It’s a game of brinksmanship, but it is won by Aguayo’s acute sense of self-awareness. He takes the project seriously, but not himself. Aguayo rarely breaks from the Day Of The Dead theme, but when he does it’s oddly disorienting. “Dear Inspector’” misleadingly slotted in near the album’s start, is essentially a new iteration of The Beatles’ “Tomorrow Never Knows”, complete with lysergically wandering vocals. On first listen it sounds like something of an aberration, but it soon reveals its odd complexities, with vaguely bestial samples interlocking with percussion that flits in and out of the polyrhythmic.

Indeed, The Visitor is at its best when it embraces cumbia’s most percussive elements. Its highwater mark is “Levantate Diegors”, in which furious acoustic percussion carries a track otherwise stripped to its very barest essentials: a buzzsaw synth line and oddly oscillating vocals, repetitive almost to the point of infuriation. It is here, perhaps, that The Visitor feels most like a breathing organism: music that revels in its own humanity, in which even the synthesised sounds appear somehow anthropomorphised.

Will Holland is an obvious comparison here. But, although the Quantic man has explored his own love affair with cumbia through his work with Los Miticos Del Ritmo, the artists’ approaches are very different. Holland seems fascinated by the ‘true’ cumbia sound, going to great lengths to preserve some sense of loosely defined authenticity in his recordings with the group. Conversely, Aguayo is irreverent. He has encased a warped VHS in a glistening prism, and played cumbia through it. This is a reimaginaing, rather than a re-enactment, and is all the better for it.