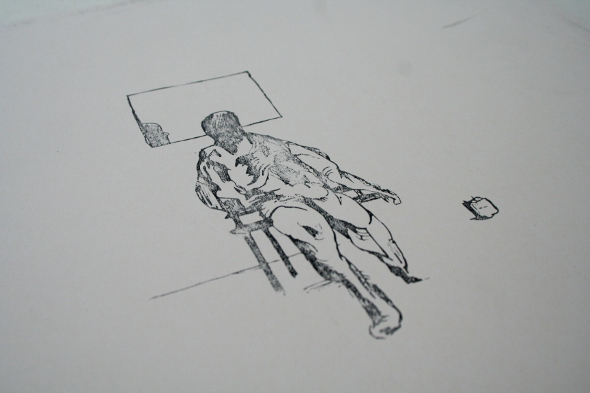 Whilst record labels are started and achieve success or failure for all manner of reasons, those borne out of the momentum already in place from a club night (or indeed a venue) with an established aesthetic tend to brandish the most impact. Similar amounts of dedication, passion and stress go into promoting nights and releasing records, as Night Slugs or Live At Robert Johnson will surely attest. It’s far too early to proclaim Forbidden Planet a success, but the Montreal label is heading in the right direction. It’s the latest extension of the radio show and club night of the same name overseen by Jurg Haller, with the latter only taking shape in the last year. As a promoter, Haller clearly knows his onions, with Terekke, Young Male, Container and Bill Kouligas amongst recent guests, and this knowledge has seeped into the label too.

Snaring some original cuts from D’Marc Cantu and a remix from DVS-1 for your debut release is both eye catching and enough to gain the approval of the proper techno heads, whilst the record’s visual aesthetic courtesy of Paul Gondry ensured it was all the more distinctive. Gondry’s abstract print work remains on Forbidden Planet’s second release, but the label’s focus shifts to an unheralded artist in Breaker 1 2 and dismisses the necessity of a high profile remixer. Supposedly hailing from Florida, Breaker 1 2 joins a swelling cast of North American production talent to adopt a pseudonym laughs merrily in the face of internet search engines (see also Local Artist and DJ Richard) leaving you to focus on the music.

Listening to lead track “2” unfold, it would be easy to lump Breaker 1 2 in with the current crop of artists nestled in the frazzled crawl space between house and techno, yet once you get to the run out groove on the flip you’ll realise Breaker 1 2 isn’t happy to merely follow current conventions, instead preferring to play with them. “2” starts out simply enough with rough claps and a slightly foreboding chord buried deep, yet the emergence of skittering hi hats sees the track threaten to derail in a gloriously disorientating fashion. The chords that were once shy break through, and bond with smudged keys lending the production a sense of haunted progression that duels for prominence with the unpredictability of some deft editing. Hogging the A Side, “2” was an obvious candidate for lead track, but it doesn’t prepare you fully for where Breaker 1 2 goes next.

The psychedelic nature of “DMT” is very befitting of its title as Breaker 1 2 teeters nervously through tape hissing beat patterns and a percolating low end aimed to throw off DJs not paying attention to the pitch. Just as the bass drum locks and the track finds its groove, the mother of all hair-raising synth tones comes jarringly into focus, smearing itself dramatically over the channels, actively goading the rhythmic elements into the shadows for the remainder of the track until snapping drums fight back. The result feels like mixing the mythical DNA of last year’s Jahiliyya Fields issue on L.I.E.S. with the percussive skeleton of Carl Craig’s edit of Throbbing Gristle and leaving it settle in tape dust for six months.

Much like the previous track, “Estonia” demonstrates Breaker 1 2 isn’t interested in merely making DJ tools; the opening two minutes shouldn’t really work but thrillingly they do. Distant strains of recycled orchestration give way to a swirling dervish of processed warehouse energy and almost comically rattling percussion, which suddenly attach themselves to a viscous thump; the intensity goes through the roof as a growling bassline and chaotically placed hats similar to the A Side rein into focus. The whole thing teeters on the line between serious and seriously over the top, and just as you think it’s going to plunge into the latter the track fades out. How you’d fit a track like this into the context of DJ set is an issue only the most talented selectors could work out – such challenges is what makes a record like this so exciting.