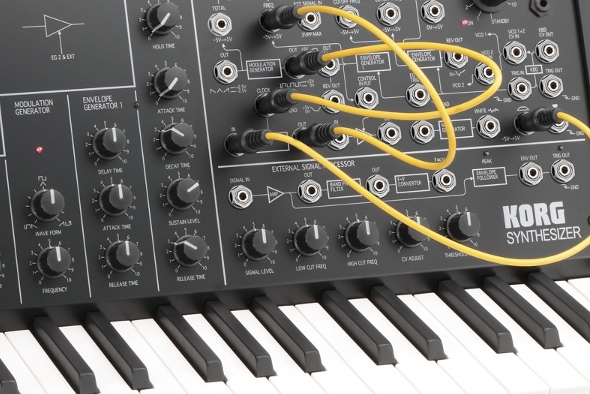 Rob Lee investigates whether Korg’s new miniaturised version of the MS-20 is as faithful to the original as it claims to be.

Originally released in 1978, there are many that have fond memories of the Korg MS-20, and even if you aren’t a member of the original generation of MS-20 enthusiasts then you may have come across an original sitting in a dusty corner of a studio and at least been curious. In short the MS-20 is a fully analogue, dual oscillator monophonic synthesizer with two envelope generators, high and low pass filters, a modulation generator with frequency, high pass filter and low pass filter modulation. Its three octave keyboard came housed in a distinctive upright case featuring a versatile patch bay for extended modulation, CV implementation and external signal processing making it possible to affect any audio source using the famous filters or even allow a guitar to trigger the synth.

To many, the single most important question that hovers around the MS-20 mini is simply to what degree this reincarnation resemble its predecessor. Audiophiles will be pleased to know that there is little to no audible difference in the sound between the old machine and the new MS-20 mini. However, the answer does require some qualifying. Firstly, the components in the original synth are now the best part of 35 years old, something that will affect the overall character of the sound. Secondly, it has been said that the new synth is a little more extreme sounding and that the filter peak plays with the sound at a slightly different point than the original. If you compare the wave forms of both machines under an oscilloscope then you will find a slight difference but to all intents and purposes Korg have come up with as close a replica, in terms of sound, as anyone is likely to manage. 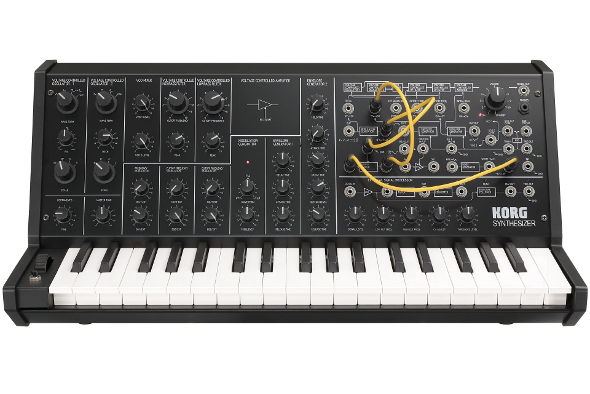 There are however some noticeable differences which, at first, appear to be just cosmetic. The new machine is a whole 14% smaller in size than the old machine, and that includes the keyboard. The keys are halfway between the mini keys found on the microKorg series and full size keys, specially designed for this unit. There is now MIDI in as well as USB connectivity, and instead of 1/4” TRS jack inputs, the MS-20 mini uses standard mini jack sized cables (3.5mm) for the patch bay, headphone out and main outputs, which is in line with the overall scaled down design. Other differences are less obvious but worth noting; for example, as in the Korg Monotribe, the two analogue oscillators are stabilised digitally. The benevolent people at Korg have also included ten mini jack patch cables in contrast to the three that shipped with the original machine.

The layout of the front panel is simple to those accustomed to working with analogue machines, but for newcomers, there is a manual (also in the style of the original MS-20 manual) which explains things clearly,  featuring simple diagrams showing how to construct various kinds of bass, string or organ patches. It also features blank templates for you to photocopy and record your own settings as the unit itself doesn’t allow you to save and recall patches. This acts as the perfect way of introducing new owners to the finer points of synthesis and in a fairly short time the whole process becomes relatively logical.

“The endless possibilities offered by the addition of a patch bay will help keep both sound design novices and veterans occupied for years without getting bored.”

Korg have gone to great lengths to get as close to the original circuitry as possible. When it came to the filter, the general consensus was that the Korg35 chip from early examples of the MS-20 had the most personality, therefore it too can be found in the latest version. The two oscillators differ slightly as VCO1 scales from 32′ to 4′ whilst VCO2 is slightly higher at between 16′ and 2′. VCO1 gives you the choice of triangle, sawtooth, pulse width square and white noise with adjustable pulse width control. VCO2 gives you sawtooth, square, pulse and ring modulator with an independent pitch tuning control. The modulation generator allows you to continuously select between positive sawtooth, triangle and negative sawtooth or wide pulse, square and narrow pulse with the option of sending frequency modulation or high pass cut off to the first envelope generator, and low pass filter cut off to the second envelope generator, but no pulse width modulation, just like the original machine.

Generally it would be true to say that Korg haven’t really changed anything significantly in this new machine. They have respectfully stuck to the function of the original whilst simultaneously understanding the wishes of current owners of the original synth. For example, the MIDI in only allows control of the notes and none of the knob parameters, it’s the same for USB. Only note information can be transmitted which means that users of the new synth will have to put their hands directly on to the tactile controls to get the most out of them.  The original MS-20 had no velocity or aftertouch, and neither does this new version; the first MS-20 didn’t allow you to modulate the pulse width and neither does the MS-20 mini, and it isn’t possible to clock the LFO from an external source either. 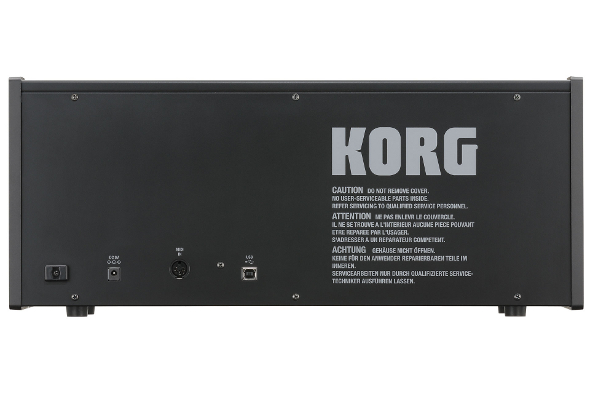 There are some minor grumbles about the amount of movement in some of the knobs, and with a small pitch control knob it’s slightly harder to tune the oscillators precisely. Korg have been forward thinking enough to realise that the lack of 1/4” TRS jack ports needn’t be a hindrance. Most people use 3.5mm mini jacks everyday with their smart phones, iPads or tablet computers and it is possible  to imagine that one day this will be the industry standard for connecting audio sources. Korg have recognised this and built the smaller 3.5mm jack ports into all of their synths including the latest Volca series. But we’re not at this point yet and you will need an adapter to connect it to your mixing desk, stage boxes or amplifier.

Korg have done something that none of their countrymen have seriously entertained before in releasing a reissue of an old analogue synth that stays faithful to the original without treading on the toes of owners of the older machines. In recent years there has been a lot of interest in analogue sounds and there are a growing number of mono synths on the market including the Mopho from Dave Smith Instruments to the Minibrute from Arturia. Moog also released the Sub Phatty in recent months. Even though all of these synths have analogue circuitry there is something about the versatility of the Korg MS-20 mini that sets it apart from the others. The endless possibilities offered by the addition of a patch bay will help keep both sound design novices and veterans occupied for years without getting bored.

But there is something more in the MS-20 mini. It’s the fact that it’s relatively simple to create a gritty sound that doesn’t want to be softened. The MS-20 mini has the ability to keep up with every edgy idea that you can imagine and is a lot of fun to use in the process. It will appeal to owners of the original machine as it is light weight and easier to carry on the road. For recent analogue converts there are plenty of connection options, including CV possibilities, to allow you to integrate this machine into your studio setup. If it’s a success, perhaps Korg will reissue some of its other older analogue equipment such as the SQ-10 sequencer or the MS-50 modular synth. But for now we will just have to wait and see.