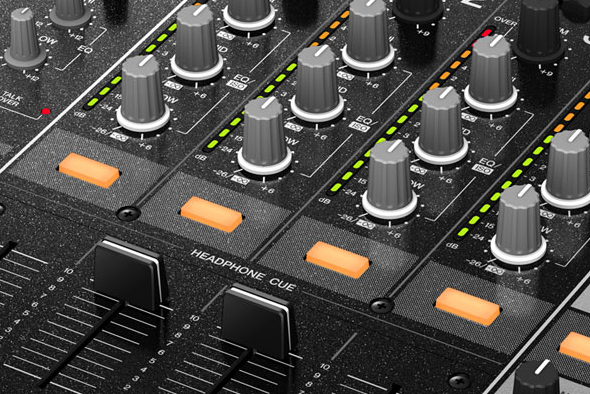 Pioneer refresh their entry-level four channel mixer with the DJM-750, whilst simultaneously bringing it in line with their much lauded Nexus series.

Given that they were the first brand to develop practical and successful CD players that DJs of all abilities felt comfortable performing with, it’s not surprising that Pioneer are the standard bearers when it comes to DJ friendly CD decks and mixers. That’s not to say that CD players with pitch control and jog wheels hadn’t been around before Pioneer unleashed their CDJ-100 in 2001, but before then the CD players installed in clubs were notoriously difficult to put in the mix and had very small pitch faders and jog wheels. Pioneer changed the playing field and it makes sense that along with their new game-changing CD player they should develop a DJ mixer of equal standing.

Luckily for Pioneer, they had already scored a major hit with their DJM-500, a four channel DJ mixer with analogue processing, that hit stores in 1996. In some ways you could argue that the famous CD players owe at least part of their success from the respect Pioneer received due to the popularity of its mixer, and at the same time setting the standard by which future models in the DJM family would grow. The original machine was one of the first to include auto BPM detection with delay, auto-pan, reverb and flange effects with a single parameter knob and the familiar orange flashing button. The basic layout and arrangement of the controls hasn’t changed much over the years, making the entire DJM series both familiar and reliable. With the DJM-700 which took its place now discontinued, it’s the DJM-750 that is Pioneer’s new basic four channel model. 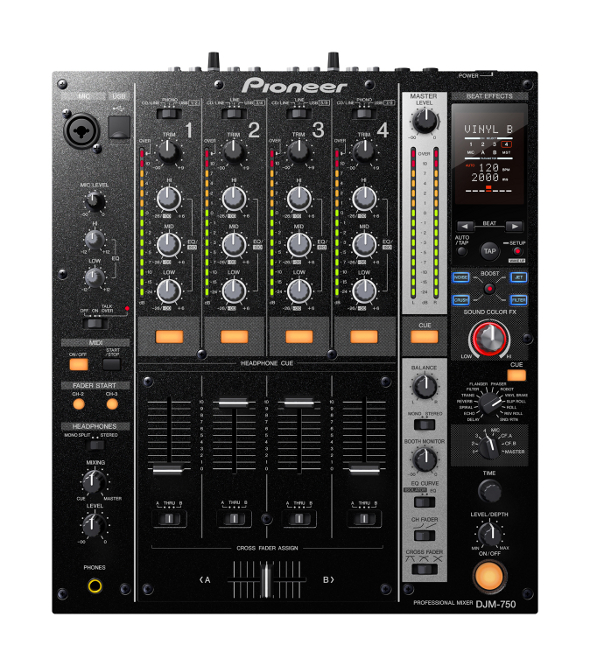 The DJM-750 incorporates 32bit digital sound processing straight out of the more advanced DJM-900 Nexus, servicing the built in 24bit/96kHz sound card, which supports four stereo inputs and outputs via the conveniently placed USB connection that sits on the top face. Routing digital channels is simple as each programme channel’s input switch includes a USB stereo pair next to line, phono or CD line inputs. The filter effect from the previous model has been upgraded to include what has been named a boost colour effect. This new FX system develops Pioneer’s sound colour effects, which consist of a very loud noise generator, lo/hi pass filter, bit crusher and jet, all under the command of a single parameter knob. The boost button then adds either a delay or a pitch effect, depending on the original sound colour effect. For example, the filter has a smooth delay whereas the jet has a pitch shifter.

In addition, all of the effects react to the rate in which you turn the parameter knob, bringing an organic quality to the table. Assigning of the boost colour effects is achieved in the same way that traditional beat effects are assigned, using the single knob below the beat effects selector, still giving you the choice of 13 beat synced effects, including roll sample, phaser, filter, delays and reverbs, with a brand new vinyl break effect that can be controlled using the beat cursors. They allow for intuitive lengthening or shortening of the relevant FX, with the smallest increment being a 1/16th note going all the way up to a 64 bar cycle, with the ability to monitor the FX in the headphone cue system. This new boost colour effect system is quite a development from the single filter found on its predecessor, and is closer to the kind of control found on the DJM-850 – only this time with a single control instead of one control per channel.

The DJM-750 also has the ability to allow almost all of its control surfaces to send MIDI messages, further enhancing this unit’s connection and user possibilities. However, Pioneer have clearly stated that this unit is not Traktor certified, meaning that if you want to use your DVS vinyl time code, you will have to use a Traktor interface; this is a slight departure from the rest of the DJM series which has been quite Traktor friendly up to this point, However, this mixer has many other pleasing features, such as switchable three band EQs which can be turned into full kill isolators at the flick of a switch. The fader and cross fader curves can also be fully adjusted on the front panel, and although it is highly likely that this mixer will mostly be used by club DJs that favour long mixes, there is enough space around the cross fader for hip hop DJs to at least be able to perform some, if not all, turntable tricks.

This updated and upgraded four channel mixer from Pioneer sits in a price range side by side with products from other heavy hitters such as Allen & Heath, whose Xone 62 mixer features six channels with a filter for each side of the Penny & Giles crossfader that has already found its way into plenty of clubs and bars the world over. But it doesn’t feature the unique macro style boost effects or theMIDIconnectivity found on the Pioneer machine. Perhaps stiffer competition comes from Denon’s DN-X1600 which features an extremely similar feature set to the DJM-750, and adds layered MIDI implementation with traditional MIDI out, two mic inputs, Traktor certification, as well as auto BPM detection and a beat effects unit built in.

However, it doesn’t seem likely that people will be abandoning Pioneer in their droves as, perhaps unfairly, Denon haven’t managed to win over the popular vote – despite the fact that their products are at least equal in function to Pioneer’s. However, the additional MIDI implementation on the Denon unit – when held up against the added effects of the DJM-750 – don’t really add up, because the Pioneer unit is much more likely to find its way into clubs and bars all over the world as the industry standard brand. Professional DJs are a lot less likely to look favourably on increased MIDI function over tried, tested and familiar effects because the one weapon that Pioneer have in its arsenal is that, for better or worse, their mixers are familiar. The basic layout and design is the same as it’s ever been, and when it comes down to it, DJs, promoters and venues are looking for tough, durable equipment that is intuitive to use and is tried and tested. Pioneer haven’t re invented the wheel with the DJM-750 and perhaps they don’t really need to. Their tough and reliable design has been the choice installation in clubs and bars since the mid ’90s, and with an affordable price tag, this mixer is likely to continue in its predecessor’s footsteps.