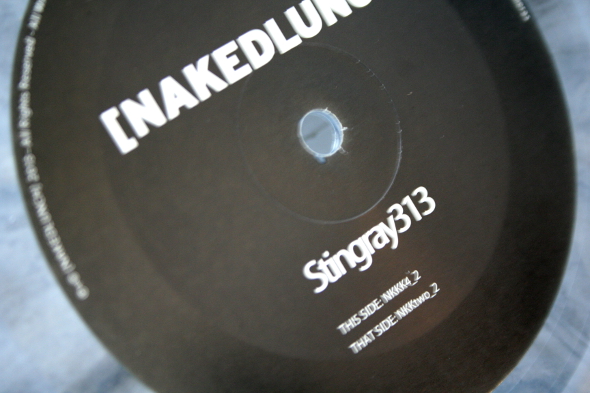 Two of electronic music’s most enigmatic entities continue their on-off relationship on this NKKTwo 2 10″. In the European corner it’s [NakedLunch], the William Burroughs-referencing dubstep, electro, bass and whatever you’re having yourself label set up in 2008. In the US corner it’s Sherard Ingram, aka DJ Stingray or Stingray313, the ski mask-wearing DJ/producer who used to be Drexciya’s on-tour selector and is a sometime member of the Urban Tribe collective.

Ingram had previously appeared on the Dublin based label back in 2010, and his presence is a reminder of the influence his music has exerted generally on contemporary producers and specifically on Boddika and Jon Convex, both who have released for [NakedLunch] together as the now defunct Instra:mental and separately. However, in an unusual turn of events, the title track sounds more like something that a new generation producer like Trevino or the aforementioned Convex would make than a typical Stingray track.

“NKKtwo_2” is slower than the standard pacey Ingram arrangement, with its jacking groove supported by clanking metal drums and a fuzzy, acid-soaked bass. It sounds like Stingray in mellow, laid back form and whether by accident or by design, it will appeal to anyone seduced by this label’s other forays into off centre techno. By contrast, “NKKK4_2” sees Ingram revert to type. The high-paced rhythm is lean and mean, shot through with a searing bassline that crackles with a relentless undercurrent. But here too there are signs that Ingram’s Stingray project isn’t solely concerned with high paced, relentless electro.

As “NKKK4_2” progresses, he introduces a melody line, low in the mix to begin with but gradually moving centre stage, its synths crystalline and frosty but betraying a hint of the fragile beauty that early Autechre and B12 releases used to exude. It may only be a brief dalliance, but this release sees the Detroit DJ let the (ski) mask slip twice to follow unpredictable paths. Let’s hope he keeps dropping his defences.