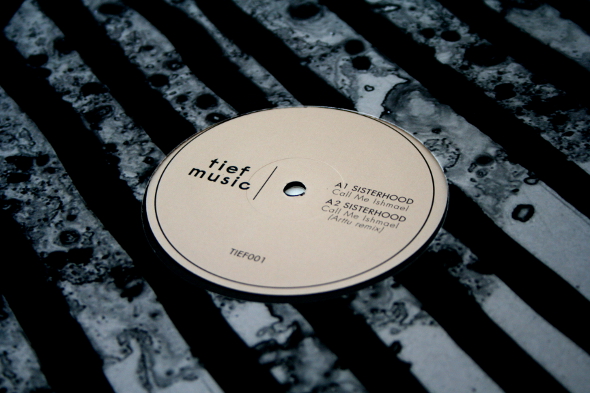 Starting your own record label has become something of a cliche in electronic music circles. While the “do it yourself” ethos on which electronic dance music culture was founded in the 1980s has always resulted in a healthy level of start-up, independent labels – some of which have become scene-changers – the relative ease of pressing up records has recently inspired many producers, club nights and DJs to do their own thing. This is not necessarily a bad thing, though the sheer number of labels cropping up on an almost daily basis is, at times, bewildering.

Tief Music is another new label, this time from the people behind London’s popular and well-regarded Tief parties at Corsica Studios. The night itself has been something of a runaway success since it launched back in 2011, and has built up much good will thanks to a steadfast refusal to pander to trends, instead offering a deeper-than-usual blend of house, techno and, on occasions, disco. This good will, and a burgeoning reputation, should hold Tief Music in good stead.

So what of their first release? Well, for starters, it’s perhaps not what you’d expect. It comes not from tried-and-tested names – an approach taken by another new label, Happy Skull, who managed to bag a hook-up between Bristol heavyweights Hyetal and Kowton for their inaugural excursion – but an act making their debut, Sisterhood. The duo of John Malcolm Moore – a friend of label boss Matt Hesselworth, and reportedly a terrific drummer and analogue fetishist – and Harry Benson (previously known for his woozy, melodic releases as Picture House) have little in the way of previous form by way of comparison, but the two original tracks here are quietly impressive.

“Call Me Ishmael”, in particular, is gorgeous. The drums are solid but fuzzy, offering a dancefloor-friendly foundation. The bassline, tucked away deep in the mix, bubbles along nicely and gives the track momentum. Yet it’s their synth work and use of melody that really impresses. There are dreamy chords and intoxicating synth lines that rise and fall, offering a calm, wide-eyed riposte to the chunkiness of the groove. It actually gives the track a new age deep house feel, like the Burrell Brothers, the Orb and Vangelis joining forces with Tornado Wallace in a remote studio on some forgotten Mediterranean Isle. New age and 89-92 ambient seems to be a big influence on producers right now; for proof, check DJ Sotofett’s recent remix of Prins Thomas’ “Bobletekno” on Full Pupp, the Confused House material, or the more downbeat moments on the new Beautiful Swimmers LP.

“Tannhauser”, Sisterhood’s other original production, offers something of a contrast. Deeper, murkier and decidedly more melancholic, its long chords, drifting melodies and hissing, cymbal-heavy groove stir fading memories of tear-jerking deep house cuts of old. Larry Heard is an obvious reference point, though “Tannhauser” doesn’t particularly sound like a Mr Fingers release. There’s a little more subtle warmth, and Harold Faltermeyer’s downbeat production on the Pet Shop Boys’ Behaviour album is probably a better comparison (in terms of tone and texture, at least – aesthetically speaking there’s not much similarity, aside from some of the vintage synthesizers and Sisterhood’s choice of chords).

Perhaps wary of the impact of releasing an EP from an unknown act – however impressive – Tief have included two remixes from producers with longer track records. The obvious standout is Juju and Jordash’s muddy, atmospheric, slightly leftfield rework of “Tannhauser”. There’s a little more paranoid oddness to the groove and choice of electronics, the beats sound even more analogue (and, it should be noted, heavier), and they eke even more emotion from the original’s tear-jerking melodies. They haven’t reinvented the wheel, but it’s an excellent alternative version.

The other remix comes from Dutch producer Arttu (4Lux, Clone etc.), who sets the dials to ‘11’ on his rock solid, acid-flecked remix of “Call Me Ishmael”. Adding some rougher, distorted elements (acid tweaks, redline drums, a stonking acid funk bassline) to balance out the dreaminess of the original’s new age synths was a smart move; that he’s managed to retain the wide-eyed feel of Sisterhood’s version is even more impressive.

Tief Music have neatly sidestepped the potential pitfalls that come with launching a spin-off label; Call Me Ishmael is an excellent debut, with enough left-of-centre sounds to impress the heads, and just the right amount of dancefloor chops. They promise more “unconventional music” in future; if they stick to their guns, Tief Music could be a label to watch in coming years.