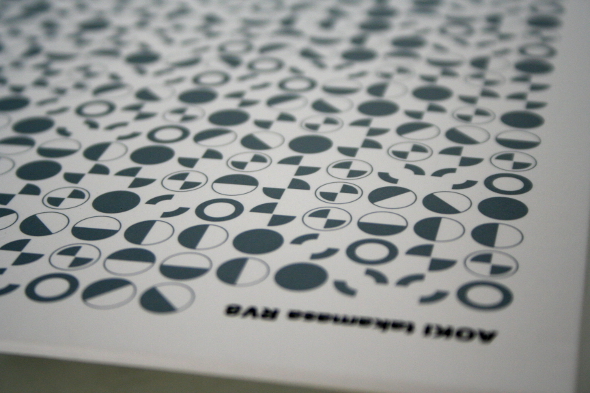 Revisiting Aoki Takamasa’s back catalogue leaves you wondering why it’s taken so long for German label Raster-Noton to secure an album from the Japanese producer and keen photographer – he was recently responsible for NHK’s Split 12” on PAN. The two met once back in 2009 with Takamasa’s Rn-Rhythm-Variations EP, a release that saw Takamasa join a burgeoning fleet of Japanese producers to issue music through Raster-Noton; namely Yellow Magic Orchestra legend Ryuichi Sakamoto, minutiae-synthesis doyen Ryoji Ikeda and the pop-meets-warped electronica act Kyoka – whose music the aforementioned Sakamoto described as sounding “like a toy box turned upside-down”.

Takamasa’s four track Raster-Noton debut sits pretty between EPs from label graduate and Semantica act Grischa Lichtenberger and Mika Vainio. Since Rn-Rhythm-Variations, Takamasa has helped to continue Swiss label SVAKT’s preference for releasing extended one-sided vinyl, while his music also appeared on a remix compilation for Sakamoto’s Commons label, mainly consisting of remixes either of Takamasa or by him, as well as a contribution to Stroboscopic Artefacts’ Monad series. Rv8 represents the tenth album Takamasa has been involved in since his emergence in 2001 with the Silicom LP for Progressive Form and represents a continuation of what he achieved on his Raster-Noton debut.

Takamasa’s material on Raster-Noton is produced at a dancefloor tempo, but there’s an undeniably synthetic hip hop feel to his music – the type you’d expect a Tokyo street performer to be dancing to in the neon-bright Shibuya district. Takamasa also combines arcade parlour tones likened to the Namco, Capcom and Neo Geo types – not the classic Space Invaders kind – with micro-flashes of that cheesy classical music heard in a lot of ‘90s anime films; Rv8’s opening track being a perfect example.

Strutted claps and metallic toms in “Rhythm Variation 04” are met with a fizzing bass thrum that lackadaisically sounds on the last beat of each bar during the sequences it’s used, while the same stabs frequenting the second “Variation” feature again in “Rhythm Variation 05”, only its jazzier groove is made sullen, licensing caustic flashes of electronics to sound, pop and tweet over a scientist-vocal speaking of “sculpting” and other terms associated with sound design. On the B-side Takamasa looks to deep house with something moodier in “Rhythm Variation 06”. Blanketed by somber pads, a sharp and thuddy kick holds a linear course travelling through a calm sea of reflective delays and doleful tones, with extra skip added by a varied cycle of intertwined claps that double-pop when landing on the same sequenced note.

Takamasa then moves from deep house to something groovier, but still house orientated in “Rhythm Variation 07”, with ‘yeah’ and ‘ugh’ vocal trimmings adding extra danceable inflection that would otherwise be lost had they not be there – particularly potent when partnered with claps. Along with Takamasa’s TV-glitched grooves, it’s his peculiar take on vocals that further defines his sound, a talent best heard on his 2005 28 collaboration with Tujiko Noriko and throughout Rn-Rhythm-Variations. Bringing the album to a hovered close is “Rhythm Variation 08”, a flutter work of whirring synths, syncopated drums and subtle left-to-right panning. Rv8 is an album that sees Aoki Takamasa stay true to form since growing up on the Japanese Progressive Form label, but with an album finally out on Raster-Noton, he’s found his home away from home.