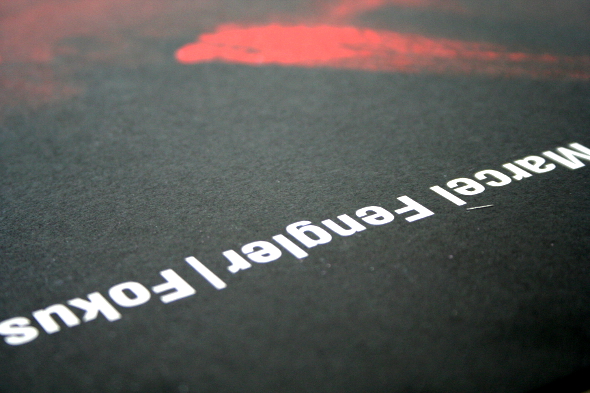 It was only a matter of time before Marcel Fengler would follow fellow Berghain residents Ben Klock and Marcel Dettmann and release an artist album for home stable Ostgut Ton. The only surprise is that it would sound like Fokus.

It is accurate to say that both Klock and Dettmann’s albums defined their musical identities. In Klock’s case, the robust drums, pace that dipped between house and techno and iron jaw undercurrent of One was as expected, whilst his colleague’s self titled long player gave full vent to the pounding industrial and visceral minimalism that defined both his DJ sets and earlier MDR releases. By contrast, Fokus throws the listener a curveball.

Of all the Berghain residents, Fengler has the tendency to play the hardest and most relentless, but that ferocity only rears its head once on this album. When it does, on “The Stampede”, it sounds like the world is ending outside. Pile-driving metallic drums take centre stage, to the point of excruciation, while gnarly riffs screech and howl in accompaniment. It’s in stark contrast to the tracks that preceded it; “Beak Through” starts the album with atmospheric organ playing merged with angelic vocals, whilst “Mayria” plumbs the depths to fuse eerie synth lines and detached vocals with teased out metallic drum patterns.

On the other occasions that Fengler ventures towards the dance floor, the excursions have more subtlety, such as “King of Psi” which starts with rolling drums and evocative chords that mutate into a straight kick. “Jaz” is based around a plunging bassline and a housey rhythm – think the swing of Larry Heard meeting the rigidity of Ostgut – over which Fengler scatters floaty synths and warbling melodies, and the chiming bells and feather light hooks of “Sky Pushing” could arguably be influenced by the work of Efdemin and Pantha Du Prince. Elsewhere, he focuses on dreamy soundtracks on the mushy ambience of “High Falls” and “Distant Episode”, a variation on Carl Craig’s home listening material, replete with mumbling vocals. It might be hard to imagine, but Fokus reveals a fragile side to Marcel Fengler that’s a million miles from the punishing techno of his peak time DJ sets at Berghain.