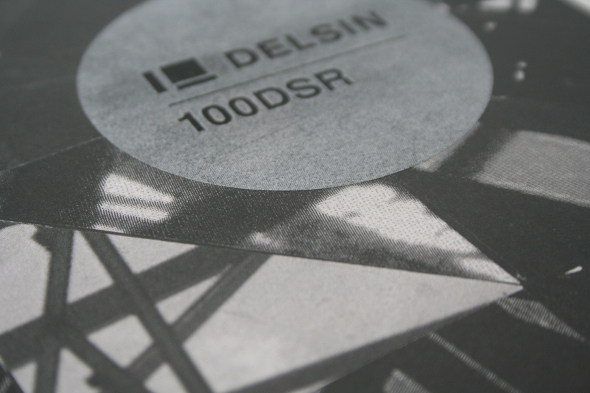 Alongside fellow Dutch operations Clone, Créme and Rush Hour, the presence of Delsin looms large over the European house and techno scene. All these operations have an imperial, multi-faceted air to them where strong back catalogues, high-grade affiliated producers and unflinching commitment to quality have resulted in some of the most sturdy and reliable imprints of recent electronic music history. Each has their own particular unifying vibe, and in Delsin it is surely a roaming, star-gazing quality bolstered by the love of strung out reverb decays and ethereal textures that characterises a large portion of the label’s output.

Now hitting their hundredth release (for the parent label at least) after seventeen years, Delsin commences a series of five singles that sum up the ethos of the label, supposedly promising select reissues in amongst new gems from the wider Delsin family. As if proving a point about not being excessively bogged down in the past, the forward thinking label has reached to three artists from the much more recent history of Delsin to populate the first release.

Claro Intelecto is up first, and his transition from his original stomping ground of Modern Love was a thoroughly logical one when released the Reform Club LP last year. His effort here, “Fighting The Blind Man”, features the hallmarks of his career, not least in the swinging, polyrhythmic bassline that drags the bite of acid into the sound chamber of dub techno, while the drums around attempt somewhat unsuccessfully to chisel some order into the scatterbrained rhythm of the track. It’s pinned down by swathes of pad that make the ride a more soothing one, but really this is a stunningly complicated track to keep up with.

You’d expect much of the same from Gerry Read, except without the soothing qualities perhaps. Representing the younger contingent at Delsin, the upstart producer follows up his Yeh Come Dance EP with the snaking, oddball fare of “Granny Bag”. There are moments where it seems to make sense, as in the first phase of the track which is dominated by a simple combination of kick, hat, synth and bass note, which speaks volumes for the poise with which Read can now operate. Of course things don’t stay still for long, and a new piercing synth line comes into focus before giving way to a separate string swell, yet where before you might have expected Read to willfully plow down an unrelated path, now the various elements of the track feed back into the narrative where it suits to bring a greater sense of closure, until of course the last twenty seconds veer off on a completely unrelated tangent. It’s good to know that wild side hasn’t been over-tamed.

Equally fresh proposition Unbroken Dub eschews the acrobatics of his co-conspirators on the record by demonstrating his own traits in expansive, elegiac techno that exemplifies what could be considered the classic Delsin approach. With just a delicate smattering of percussion, the man otherwise known as Denis Safiullin still manages to create a sense of purpose in “Spacing”, no doubt helped by the rising tide of chord that comes drifting in and out of the frame. There’s a musical quality to the percussive hits that Safiullin employs which keeps the warmth of that swell resonating long after it has retreated back. It’s a masterful update on the feeling inspired by dub techno, without any of the trademark tricks that make the genre so repetitive.

Whilst they may be three varied cuts, there’s no doubt that all these tracks sit well together, between them kicking off what promises to be as essential a series of 12”s from Delsin as you would expect from a label with high standards to match its track record.