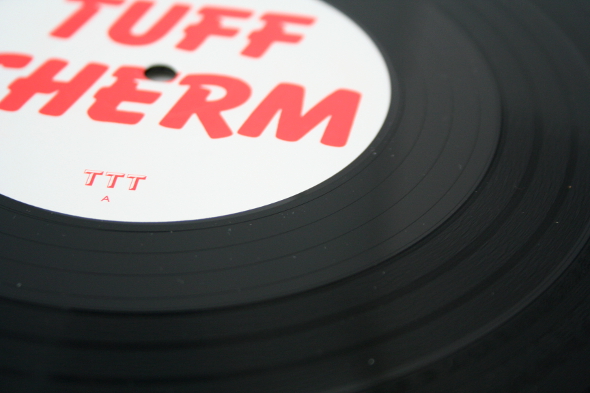 For someone who’s publicly acknowledged their difficulties with depression, it seems quite apt that Eugene Hector should have two such disparate aliases. While many producers use different projects simply as a means of flitting between genres, Hector’s hyperactive take on footwork and bass music styles as Dro Carey, and his deformed house and techno as Tuff Sherm feel more like they could be explorations of Hector’s differing mood states than mere structural experiments. Whether this is the case or not, there’s no denying that there’s an underlying queasiness behind all his productions that means his music as Tuff Sherm shouldn’t simply be categorised alongside the increasing number of raw house and techno producers.

Having said that, Hector’s fourth release for Will Bankhead’s Trilogy Tapes imprint would seem to challenge that conception with its opening gambit; with its gurning metallic rhythms and screwface chainsaw synths, “Cleric” could initially be mistaken for one of many identikit industrial techno tracks currently doing the rounds, but the drifting kick and ambient textures the show up at the midpoint feels very much like a conscious attempt to graft minimal and maximal elements onto each other in a monstrous fashion. “Groin Boils” continues this dirty aesthetic, with bitcrushed percussion and stuttering horns that sound like their batteries are running out of juice. It’s left to a jagged, overpowering bassline to inject some energy back in, but it sounds palpably like its trying to drag the other bits along like a shire horse attempting to pull a tractor. Conventional 4/4 Burglar Loops isn’t.

It’s around about the point when the title track kicks in that this EP starts to make sense; the ghetto vocal sample, angular string loops and melancholic chords have more in common with the codeine soaked timestretch of Houston’s chopped and screwed movement, or the more nihilistic end of ‘90s rap than house or techno, while the sampled click of pool balls which seem to stand in for gunshots in “Drakkhen & Bley” come accompanied with the kind of swing and sunken bassline of hip hop. As odd as it may sound, the monochromatic blasts of synthetic noise that cover the track (and indeed the EP as a whole) are most reminiscent of the savage, melancholic production on Kanye West’s recent album Yeezus; just as that album squashed all of hip hop and the past few years of electronic trends into a compression-saturated squall of alluringly industrial sound, Burglar Loops achieves much the same effect, even if the reference points are different. West might have had Daft Punk, TNGHT and Evian Christ on board, but on the basis of this EP, Hector probably could have done just as good a job himself.