The Hydra announce details of 2013 series

Roving London event series The Hydra has announced the first details and dates for its 2013 edition.

Now looking to be regular fixture in the London calendar after a successful run last year which saw a raft of international talent and label showcases from the likes of Nonplus, Ostgut Ton and Dial Records, this year will see the organisers – Broken & Uneven and Electric Minds – expand operations with an even bigger line up.

Although full details have yet to be announced, the first four parties will see a Blueprint/Underground Resistance party on August 24 featuring Robert Hood, Jeff Mills and James Ruskin, with a Running Back night the following night featuring Gerd Janson, Tiger & Woods and John Talabot. The next month sees the 3 Chairs quartet of Moodymann, Theo Parrish, Marcellus Pittman and Rick Wilhite descend on London for a rare appearance together on September 27, whilst Electric Minds celebrate their 8th birthday with Move D, Kassem Mosse, Prosumer, Fred P and Recondite on October 5. In addition to these, the rest of the series will see label showcases from Hyperdub, R&S, Kompakt, Works The Long Nights, Modern Love (in collaboration with MUTEK), Border Community and Ninja Tune, with the obligatory NYE and NYD parties also planned.

Further details and tickets can be found here. 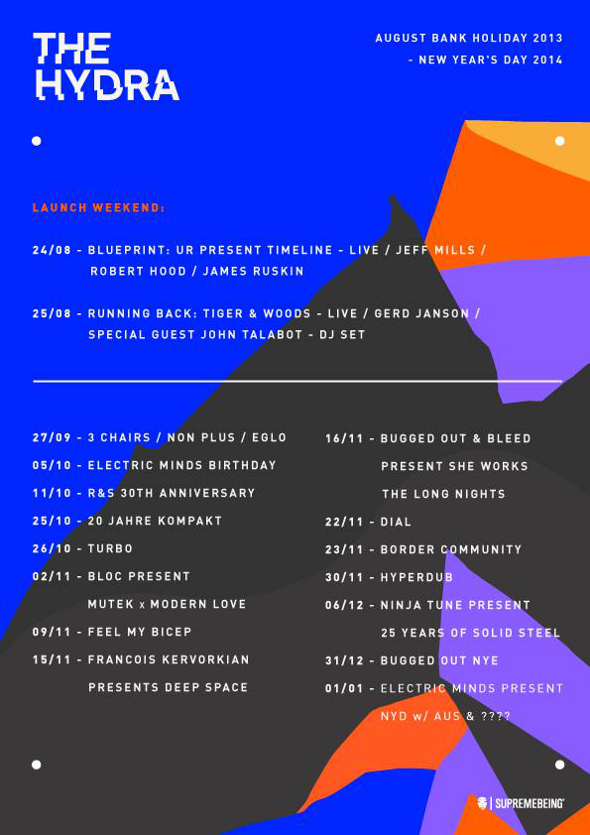