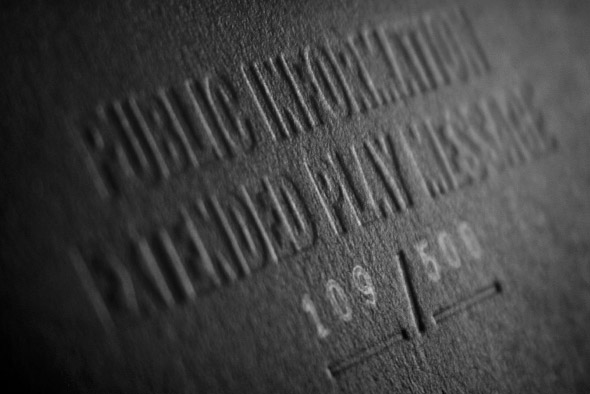 A title like Future says a lot about an artist’s intentions, before even a jot of music has come forth. Of course it can be interpreted in many ways, from a statement on where music should be heading, where it could be heading, where it is heading, to even where people imagined it was heading thirty years prior – although let’s not get bogged down in retro-futurism, there’s plenty of that around already.

Short of any crystal ball wielding producers out there, it would be hard for anyone to break away from pre-existing forms and bring a shock of the new like people may have had listening to the beginnings of house and techno. It’s hard to ascertain quite what IVVVO’s motivations are then for his own Future musings, but one would suspect on listening there is a more thematic influence at work rather than some literal prediction. As with All Shades Of White, IVVVO’s album for Opal Tapes last year, there is much about the Portuguese artist’s methods that harks back to the good old days, where primal synths and unfussy drums twist out against carefully administered dust and grime, but there’s never a sense of repetition or over-familiarity even if the tools are tried and tested.

The opening strains of “Darkness In My Soul” certainly come on like the dazzling vistas you might project from listening to Vangelis, as a stoutly sustained string harmony meets with a groaning swell of machine emission, but it’s not long before a beat thuds out with a little help from some rhythmic laser blasts on a course set for more experimental territory. Shapeless doodles of sonic interference shore up as the beat falls away, but through it all the strings glue the beguiling experience together before the main refrain kicks back into action. It’s a confusing and enlightening ride that pays no heed to dancefloor necessities, but rather uses 4/4 rhythm as just another part in a much bigger picture.

It’s also worth noting that, while lo-fi in its inherent nature, there is never a sense that IVVVO is leaning too heavily on sounding vintage. Indeed “Before The Death Of Rave” sports a curious blend of Casio melody that wanders erratically over scales and rhythm, while the key synth groove comes from a low and ominous canned string sound. With some extra crackle thrown in for good measure, many might hear all the retro evidence they need to in this track, but really there is too great a concern for the madcap emotional response afforded by unconventional melodies to write this off as style over substance.

If that point needed proving, then the solo piano “Rave” vignettes that end each side of the record do a fine job. With a careful treatment that calls to mind the prepared piano moments on Aphex Twin’s Drukqs, they provide a palette cleanser of tangible message amidst the more alien signals that dominate the rest of the EP. It’s quickly forgotten in the midst of the title track, which quickly tangles itself up in arrhythmic loops of noise, melody and percussion purposefully knocked out of joint. The reverberating chime of the lead synth is tasked with smoothing the mess out, making the disorientating remit of the track clear just as it serves as a necessary hook to allow the wayward elements to claim their place.

If anything, Future comes on with a charming naivety, barking out impulsive keyboard lines and strange swathes of noise without too much concern for finesse at the risk of creative flow. There may indeed be a desire to befuddle the listener with the bountiful curious melodies and jerky drum triggering, but it feels as though it comes from an innocent happenstance rather than a conceited approach to weirdness. After all, the revival of lo-fi techniques has betrayed those who try to actively dress their music down. In the end, there’s just no faking the honest approach.