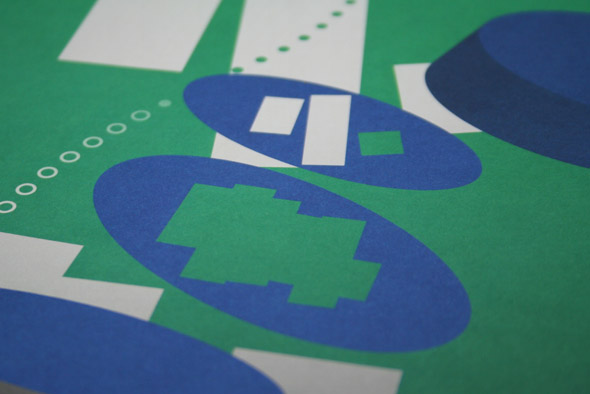 Of all the artists to appear so far on Mute’s Liberation Technologies sublabel, Powell somehow feels like the most appropriate. His style of what you could only nominally describe as “techno” owes more to those combining post-punk, electronic and industrial elements in the late ’70s. Suicide are the most obvious comparison (indeed Powell has recently stated that they are an influence), but appropriately enough, The Normal’s “Warm Leatherette”, the B-Side to Mute’s first release would be an equally pertinent comparison; its primitive beat pattern, nonsensical spoken word utterances and high frequency synth blasts are pretty much an early analogue of the strange constructions present on Fizz.

Although Fizz undeniably treads undeniably similar ground to Powell’s previous material, the two central tracks feel like the most vividly realised examples of his style to date, combining the manic loops and drones of his first two Diagonal EPs with the more freeform use of samples present on his Death Of Rave release. It was the samples that made that record particularly notable for Powell, moving on from simple beat mechanics to something that evoked the feeling of being present at a no wave gig in New York circa 1979 (the trebly “Oh No New York” in particular sounded like it could have come from a long lost cassette artifact), an idea taken to strange and compelling extremes across this EP.

Powell’s most recognisable components are present on the title track; frantic drum loops tumble over angular electric bass, while intermittent hi-hats crash in, punctuated by discordant guitar squall and monophonic analogue swells. Where the use of samples on that last EP’s “Rider” created a distinct sense of location, the incongruous use of samples in “Fizz” are much more scatterbrained and impressionistic: a car alarm, someone repeating “this headache” (possibly culled from an 80s US TV ad) and some unexpected crowd noise chief among them. It’s not clear whether Powell’s jarring collage of audio detritus is actively trying to subvert the idea of the dancefloor by dragging your brain to completely new and disparate mental locations, but that’s what it feels like.

“Wharton Tiers on Drums” tones down the jarring samples for something more uniform, but it’s still laden with subtle changes in direction that keep its hysterical pace from becoming exhausting. Namechecking the seminal no wave figure makes it seem like Powell is making his influences a little too obvious to his audience. However, like the absurd image the name creates, and the play on the idea of a “bonus beat” contained in the title of the 90 second “Beats” that concludes (as if anyone would be able to use it as a DJ tool aside from the producer himself), it’s obvious that Powell is someone with a sense of humour – something that hasn’t been quite as apparent as it is on Fizz.

A. Fizz
B1. Wharton Tiers On Drums
B2. Beats