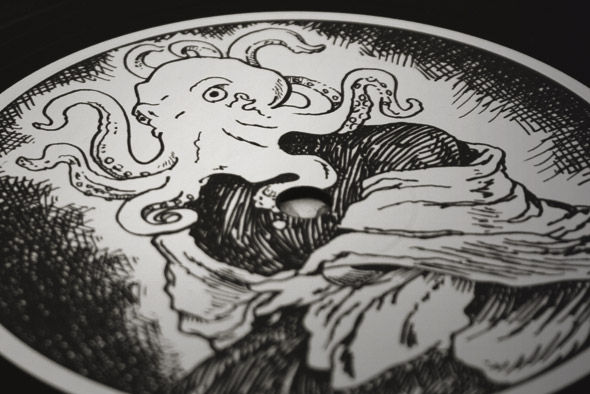 Untold’s newly minted Pennyroyal label appears continuously more disposed towards the maniacal side of techno, delivering a third release of sinister and provocative sounds in as many months after a pair of wacky yet brutally functional chest-bursting EPs from J.Tijn. Boner M’s Kopkopkop is a release shrouded in its own ’90s glory – a merely external coating rather than a firm musical blueprint – where the Finnish native successfully extends the label’s UK tradition of ‘slice-n-dice’ techno.

What we have here are three loud, proud and intrinsically psychotic dancefloor stormers injected with near toxic levels of squelching sci-fi funk, closely reminiscent of the golden era’s hedonism. Whereas Boner M’s two previous releases have been comparatively tamer in their genetic makeup – DJ Rush-type kick drum bombardments, Mills-ian melody shreddings and dangerously high BPM levels aside – this latest three-tracker seems to offer a more distorted and deranged snapshot of the man’s 4/4 ideology, perhaps even looking outside of techno’s oppressive foothold for inspiration.

Whether this is true or not, “Kopkopkop” – which actually represents the gentler side of Boner M’s furious beat hysteria – isn’t exactly your average techno workout, and although its arrangement broadly adheres to the common criteria, there’s still a high dosage of grit manifested in its fullest thanks to the grainy, almost VHS quality of its texture. Moreover, whilst the progressive build-up of slicing snares extends for almost the entire course of the track, Boner M allows the rest of his sonic battalion – composed of sludgy, torn low-frequencies and moulded drops of saturation – to penetrate violently into the mix and produce a thick sphere of sweltering technoid noise.

The situation only grows more hysterical with “Poke”, where we’re now fully immersed into a brutal clash of sounds which, apart from their more immediate Birmingham slant, sound impressively fresh and surely noxious enough to cause an abundant burst of euphoria on any large soundsystem. Each individual sound is raw, dirty and ridden with just the right amount of hiss, whilst the arrangement sounds improvisational and largely DIY, especially once the initial slot of overdriven bass-drums and the track’s recurrent synth stab lose themselves in a winding cyclone of tape bypass, only to end with a sudden halt of the machines resulting in a true poke of the senses.

The intensity remains intact on “Fakmii” which seems a fitting way to end Boner M’s debut for the Pennyroyal household; the hellish wormholes of the first two tracks would have seemed like leviathans next to a weaker, less daunting counterpart. However, the preceding four-to-the-floor flex is now mutated into a more broken, more electro-sounding prospect, where its individual parts have much in common with the Bunker or Panzerkreuz mentality of large, distorted, fast-paced 808 punkism. This Finnish producer really shines through on this final number, where we enter yet another dimension of his aggressive techno mind-frame and experience what could have been the possible soundtrack to the xenomorph’s terrifying corridor jumping in Ridley Scott’s Alien saga.