Oneohtrix Point Never will release his next album R Plus Seven on the esteemed British label in September.

Although details of the album are typically scarce – Warp describe it as “disruptive and hypnotic in equal measure” a statement that could realistically apply to any of his albums – it nevertheless sees the producer engaging with something closer to traditional song structure than ever before, albeit within the frame of an album “full of overlapping, abstract musical through-lines, puzzle-like pieces that, taken together, might allow you to glimpse an overarching tableau.”

Since coming to prominence in 2009 with the Rifts compilation, which collected highlights from the producer’s various releases since emerging in 2007, the man otherwise known as Daniel Lopatin has been something of a figurehead for a new generation of synthesiser music. Although Lopatin’s early style had its roots in new age, ambient and kosmische music, his last solo LP, 2011’s Replica was constructed around samples of television commercials. While previous releases have come from somewhat more underground labels such as No Fun, Editions Mego and his own Software imprint, his new association with Warp marks his biggest – and most logical – career move to date, and should be watched with interest.

Warp will release R Plus Seven on 2xLP, CD and digital formats on September 30. 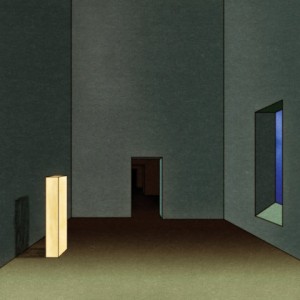