Gold Panda – Half Of Where You Live 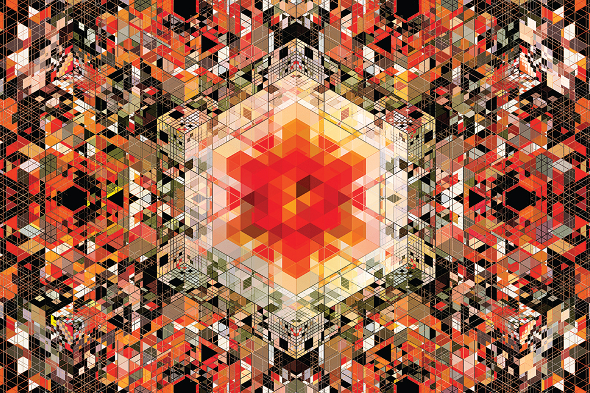 Back in 1999, David Byrne of the Talking Heads wrote an article in the New York Times entitled “I hate world music”. In it, Byrne argued that the term was terrible because it segregated certain Non-Western sounds from being taken seriously, that the name came packaged with an inherent dismissal of other cultures. ‘World music’ was cute, exotic or weird, but always irrelevant to life in the West. Fifteen years before the NY Times article saw publication, Byrne serenaded a gigantic lamp onstage at the “Stop Making Sense” tour while singing about longing for a sense of home in “This Must Be The Place”. Both the song and article present the same underlying idea: That home can (and should) be everywhere.

Gold Panda seems to be tugging at many of the same threads Byrne was in Half Of Where You Live, his second LP on Ghostly International whose title alone suggests that the idea of ‘home’ might have to do with much more than geography. Cramming multiple meditations about diaspora, belonging and culture within an eclectic electronic framework, it’s an album that’s much like the process of touring and playing music around the world that informed its creation: frantic at moments and reflective at others, packed with exhilaration and plodding standstills.

The likely pop highlight of the album “Brazil” succeeds in making music from around the world that doesn’t sound like “world music” – merging clinking wind chimes, and a plunky, adventurous manipulation of the cavernous bass patterns Claude Von Stroke wielded so well in “Who’s Afraid of Detroit”. It’s a track that’s set in motion from its opening seconds, and while the repetition of the word “Brazil” thrown on top of the track can get grating (repeated close to a hundred times, it lacks the whimsical ecstasy of 2010’s “You”) the general feeling is still a joyful rush that grows with multiple listens.

A familiarity with history or geography helps deepen the listening experience: “Enoshima” is named after the Japanese island which houses Benzaiten, the goddess of music and entertainment. Gold Panda keeps the thrums and clicks of the track fairly minimal until a rising trumpet call overwhelms all other instruments and reaches a crescendo. The ‘less is more’ philosophy of “Enoshima” is when Half of Where You Live feels most lively and vibrant, where ideas can unfurl slowly and breathe while doing so.

“The Most Liveable City” throbs with vibrancy similar to Dan Snaith’s pre-Caribou project Manitoba, but at a BPM that has more common with juke and footwork than folktronica. Beginning with chirping bird sounds and a snippet of a phone conversation with what this writer assumes is a loved one asking “Are you okay? Are you getting depressed?” it feels like a snapshot of life as a touring musician: crammed with fleeting beautiful moments, while simultaneously being emotionally taxing.

“Community” is immersive and disorienting, droney synths and growing percussive loops behind an excited chant. Panda has stated in press releases that his intention was to soundtrack a ride from the airport to downtown, the track’s diversion into discord representing the overwhelming and crowded feeling of city traffic and skyscraper, and the track verges on dissolution many times, held together by a few taut threads. It might lose a club audience, but in the right contemplative headspace, it’s a track that makes you feel like you’re slowly disintegrating on the spot.

“Junk City II” pulsates with garbled sounds of old discarded computer hardware, apparently “conceived as a hypothetical soundtrack to ’90s anime and the films of controversial director Takashi Miike.” The track itself is stunning: working an anthemic scaling synth line amongst garbled MSN Messenger notification sounds, but Panda’s description of the track unfortunately make him sound like less of a traveller and more of a tourist: “These films depicted a post-economic boom Tokyo in the 1990s”, he says, speaking of Miike’s work, (such as the infamously bloody Ichi The Killer)”and there was a last days feeling in them. [The feeling] still lurks [in Japan]. I saw a return to that possible dystopia. I’ve seen people in Osaka walking around, jobless, mental and stricken. I think real desperation and poverty is returning; it’s quite scary.”

As this writer was stationed in Osaka for several years, Panda’s description of the “jobless, mental, stricken” residents sounds patronizing and unfair considering that homelessness and financial instability are global epidemics, and it’s only in moments like these that Half of Where You Live might slip into the old habits that lead to stereotyping cultures – the very thing that gave rise to the term ‘world music’ in the first place. Fortunately, the blissful piano ballad “Flinton” holds enough resonance to make even the most jaded music reviewer melt – part regimental mechanical clapping percussion, and part bittersweet organic chords, it comes close to eclipsing “Brazil” as the album’s most affecting piece.

While the sheer number of instruments and geographical references packed into Half of Where You Live are enough to make a Lonely Planet writer blush, the most accomplished thing about Panda’s latest LP is how adeptly he adapts his playing style and tempo to the locale or situation he focused on. Though there are moments reminiscent of long airport layovers, Half of Where You Live is much more about delirious movement through stunning landscapes: Only staying in each long enough to give a glimpse of how big your home really is.