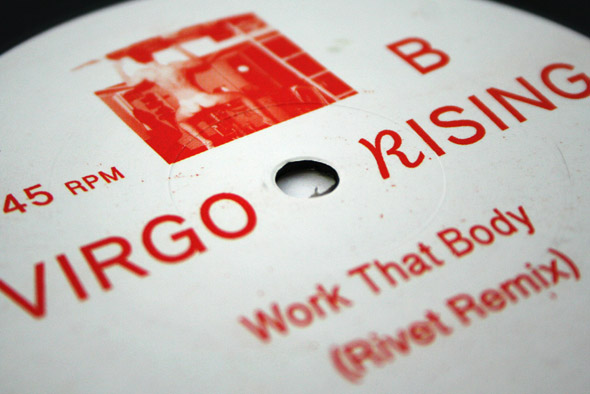 Before 2013 rolled into effect it’d been almost 20 years since Patrick Sjeren’s last full release – on the short lived Fuck Pig Records – but if the title track to Work That Body is anything to go by, it certainly doesn’t sound like it. Sjeren is one of techno music’s more enigmatic characters; not in the sense he wears a mask and cape, working under a veil of anonymity, in fact it’s quite the opposite. Sjeren simply stopped making music after 1995 and resurfaced 18 years later.

Touted as a Swedish acid techno legend, what makes Sjeren’s reputation that little more enigmatic is his “Untitled” credit on last year’s Omar S 988 12″. Like Sjeren’s tracks on Work That Body, “Untitled” had a lo-fi rawness that’s undeniably ‘90s, presenting two possible scenarios, one; It actually was from the ‘90s, or two: the only difference to Sjeren’s production model is an 18 year coat of dust. With two releases to his name in 2013, both on the new Malmö label Virgo Rising, it would be easy to assume the Malmö-residing producer is staging a comeback.

Everything to do with the Work That Body EP is distinctly ‘90s; from the artwork (a fit Swede hanging naked from a bunk bed?), its bold red-on-white typeface, to the vinyl format its presented on and the music itself. Sharing the EP’s A-side are two originals, and the first, an acid mix of “Work That Body”, sees a gabba-esque synth line burrow through the mix like a hyperactive weevil bug gone mad. Rigid hardstyle drums, with Robert Hood-like claps that land on each kick, are seemingly positioned closer to each other by the bar, while a varied and pointless ‘everybody work’ vocal serves its purpose well, it’s a stark reminder of what techno was once like.

“Mannitj” sees Sjeren produce something more accessible to the 2013 ear. Beginning with hi-hats effected with a Fachwerk-sounding tremolo, only less crunchy, a thrumming kick drum paired with kung-fu-thwacking claps sets a raspy tone. A yapping staccato stab then enters the mix and along with added kitchen-draw percussion, “Mannitj” becomes a rhythmically frenetic and low fidelity drum track purpose built for the dancefloor. The EP’s other draw card is Adam Rivet’s feel good remix to “Work That Body”. The once masked producer completely transforms Sjeren’s original from a hard, Swedish – and at times comical – techno banger, to something lighter, but ultimately soulful and upbeat.

It’s Rivet’s introduction of a totally new vocal, which enters the mix with uplifting chords, that truly brings the track to life. Rivet also swaps the crazy acid line for Chicago house keys and bass, while keeping the tracks original rhythmic structure and percussive elements, in turn creating a remix combining influences of the past – good and bad – with a modern touch of class.