MGUN – If You’re Reading This EP 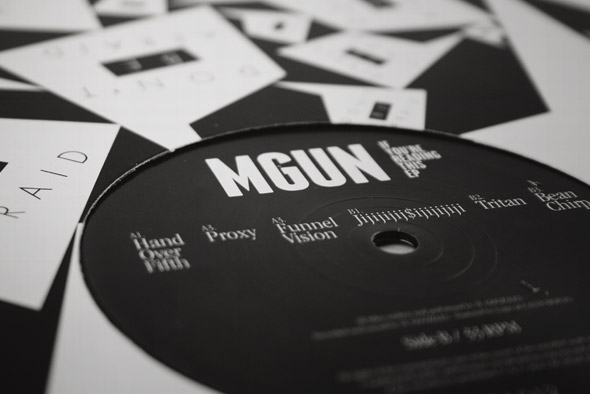 Whilst there’s been a lot (perhaps too much) made about supposed notions of ‘outsider’ house in the dance music media since the turn of the year, this latest record from Manuel Gonzales demonstrates the tag certainly does not apply to him. He returns to Don’t Be Afraid under the MGUN mantle following a breakthrough 12 months that included a debut release for DJ Semtek’s label as well as further 12”’s for equally respected labels in Wild Oats and The Trilogy Tapes.

There is no doubt that If You’re Reading This consolidates Gonzales’ reputation as a talented producer, and the six tracks here are steeped in Detroit’s house, techno and electro heritage and demonstrate that above all Gonzales knows his musical history. Even its delivery recalls releases from the 1990s, when there were often three tracks per side. Indeed that’s the first noticeable thing about If You’re Reading This; there are six tracks, which is in stark contrast to the one-sided house 12”s that go for high prices online, but in places the musical influences are similar.

The release begins with the raw, slamming beats and churning chords of “Bean Chirp”. Clocking in at under three minutes, it’s a reminder that deep house doesn’t have to be sleek and polite. “Funnel Vision” also favours this rough approach; it too features a heavy rhythm, a pounding kick and the interplay between airy high frequencies and swarming techno riffs – not unlike an old Kevin Saunderson or Stacey Pullen record. But on “Hand Over Filth” things start to get weird, with falling down the stairs drums and discordant riffs combined, while the impossibly-named “Jijijijij$ijijijiji” sees Gonzales throw down a wild electro jam; part grinding foundry riffs, part heavy 808s and part bassy R&B swagger, it’s the sexiest sub-three minute wonder he has produced.

Yet despite this variety, it is clear that Gonzales’ heart still belongs on the dance floor. “Proxy” is a grimy acid workout, its lo fi drums supporting a gurgling Phuture/Hardy-style sequence that gets tweaked and treated over the course of 8 minutes, while “Tritan” sees spaced out pads unfolding over rolling snares and a funk bassline that would do Juan Atkins proud. These are knowing references from a true insider – let’s cherish them as such.

A1. Hand Over Fifth
A2. Proxy
A3. Funnel Vision
B1. Jijijijij$ijijijiji
B2. Tritan
B3. Bean Chirp