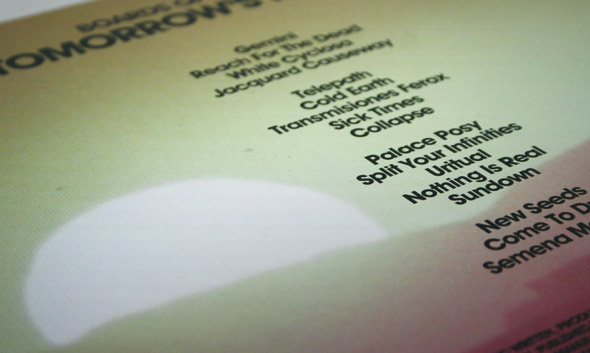 It’s been a long time between drinks for Boards of Canada pair Mike Sandison & Marcus Eoin. While they were never forgotten – thanks, primarily, to the cultish following they’ve built up over the years – it’s fair to say that much has changed in the musical landscape since the release of their last album, 2005’s The Campfire Headphase.

Their absence, apparently due to traveling and studio rebuilding, has allowed others to take leftfield electronic music in different directions. Their particular brand of post-IDM electronica – a distinct mix of musical nostalgia, soundtrack-inspired creepiness and intense beauty – is no longer particularly fresh. Artists such as Jon Hopkins, Kelpe, Dalhous, Demdike Stare and John Roberts have delivered recent albums that play on similar influences, whilst somehow finding their own peculiar niche.

The hype attached to the release of this unexpected ‘comeback’ album doesn’t help. Given their cultish fan base, love for keeping people guessing and self-cultivated air of mystery (see also Daft Punk, whose Random Access Memories somehow managed to sell in enormous quantities despite being so-so at best), there was always going to be a lot of talk about Tomorrow’s Harvest. Yet the way Warp’s press department have marketed it, drip feeding information or remaining tight lipped, you’d think that we were about to witness the second coming.

Of course, this is slightly harsh, but the fact remains that an album has to be pretty darn good to live up to this kind of canny marketing and feverish hype. Thankfully, Tomorrow’s Harvest makes for a worthy return. It’s not that there’s anything particularly new about it – it sounds, for all intents and purposes, like a Boards of Canada album with a few more knowing nods and winks towards their beloved obscure 1970s and ‘80s art house film composers – it’s just that it is a majestic collection of electronic music.

From start to finish, it’s gripping, vivid, quietly cinematic, emotion-rich and expertly produced. It is in turns melancholic, obtuse, creepy, intense, neurotic, wide-eyed, knowing, child-like and otherworldly. It sounds, perhaps predictably, like a soundtrack for a film yet to be made, albeit one produced with synthesizers, drum machines and computers rather than an orchestra. In some ways, it’s hard to get a handle on. That’s not to say it’s tricky to soak it all in – one of the joys of listening to it is the decidedly filmic nature of its undulating flow, as if it was designed as a series of interconnected scenes without a clear narrative – but rather that you’re too busy enjoying it to pay much attention to the specifics of individual tracks. Like the best albums of its ilk, it should be judged as a whole. That said, there are plenty of inspired moments to savour.

Take “Collapse”, for example. Building quietly over the sounds of lapping waves and tumultuous storms, its calming synthesizer oscillations and subtle, barely audible melodies evoke images of horror yet to come. “White Cyclosa” takes a similar approach, its unearthly chords, droning ambience and sharp arpeggios simultaneously seeming beautiful and strangely uneasy. “Sick Times”, one of a handful of tracks to employ the sort of fuzzy, loose, downbeat breakbeats that were once the hallmark of British IDM, contrasts its percussive element with some heart-aching strings and peculiar electronics. Then there’s “Nothing Is Real”, an intensely beautiful, hip-hop tempo flashback to the days of Music Has The Right To Children and a million half-baked copies of its gorgeous innocence. Their trademarks are all present – see the heart-aching ambience of “Sundown”, the turquoise rush of album highlight “Come To Dust”, and the chiming melodies and off-kilter beats of “Jacquard Causeway” – but that does nothing to lessen the mesmerizing effect of the music.

Many will no doubt strive to read much into it, contextualize it and look for clues to unlock some kind of mysterious code; this seems the way Boards of Canada’s obsessive fans devour their music. Yet there’s something far too calculating about this. Sure, there may be higher meaning to their music, but then again Tomorrow’s Harvest may just be an inspired collection of wonderfully visual electronic tracks from two slightly odd masters of the art form. Either way, it’s a terrific album, full of tracks that run the full gamut of emotions. Savour it – it may be some time until we hear from them again.