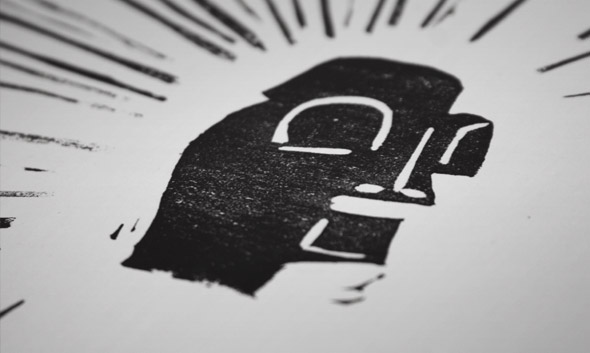 Stefan Schwader is a stealthy character within electronic music. His output as Antonelli Electr. and The Repeat Orchestra (amongst other offerings) have amassed little more than a cult following, and yet they display a gift for unique and heartfelt house and techno that might see other artists exalted upon given the right promotional push. Schwader seems to possess a clear and concise vision within his various creative guises, each alias focused on a specific and consistent goal and operating with that rare mixture of prolificacy and high quality.

Of these projects, Harmonious Thelonious is perhaps the wildest, most adventurous of the lot. Compared to the slender 4/4 poignancy of Rhythm Maker or the melodic warmth of Antonelli Electr., the HT output is obtuse and jagged in its execution. Of course such an observation is relative, and there is far more obtuse and jagged music out there to be found, and what is pleasing about The Malag EP is that Schwader’s innate tendency towards delicacy and refinement still manages to come through even as he seems to be purposefully wielding more abrasive, experimental elements.

In that sense, he makes for a snug fit on Belgian label Meakusma, which has already established itself as a wonderful outpost for left-of-centre music informed by house and techno just as it gleefully runs away from such ideologies. Anyone familiar with the work of DJ Yoav B, Terrence Dixon or Madteo, all contributors to the label, will understand that curious positioning of prominent melody and soul in the midst of chaotic constructs. Looking back to the purposeful aims of Schwader’s projects and his own definition of Harmonious Thelonious as “focusing on rough and dense beats and textures inspired by American minimalist music and African rhythm patterns,” the centerpiece track of this release “The Grasshopper Was The Witness” could not nail this description better if it tried.

After a teasing lead in the core theme of the track kicks off in earnest, looping a range of poly-rhythmic patterns both percussive and melodic on top of each other with an earthen rumble that can only be described as tribal. Subtle hits of timpani boom in the background, whilst a woodblock melody pirouettes in the lower register and a lead synth melody chimes out with an almost woodwind quality in the front of the mix. With a shaker and a broken kick reduced to supporting characters in this exotic and tumultuous creation, it’s hard not to get a sudden rush of evocation for somewhere far removed from the urban traits of techno. And yet for that feeling, this track is undeniably techno, albeit in the kind of gnarled fashion that makes the aforementioned Terrence Dixon such a singular prospect.

As if the mental image of sundown on the Savannah wasn’t tangible enough from the original track, Elmore Judd and Rowan Park do a sterling job of building on that equatorial atmosphere with a remix that shears away the subby boom of Schwader’s original, leaving a healthy amount of breathing room in which to add flute (or some other such pipe), similar arrangements of organic percussion and fittingly chorused vocals that coo an exotic tale as spiritually uplifting as it is unusual.

The rest of Schwader’s offerings on the EP continue to confound and delight in equal measure, whether it be the searing radiance of the synths on short-lived electro workout “Don’t Lose Your Head”, or the claustrophobic and bleary eyed rumble of opening track “Ausgelieferte Muziek”. On the note of that African rhythmic influence though, final track “The Malag” returns to the thrilling pound of timpani while a tangled labyrinth of melody contorts above it and you’re once again transported to a distant place of myth and wonder, as unsettling as it is exciting.

Harmonious Thelonious is certainly a project that stands out from the subtleties and neat lines of Schwader’s other work, but in its precise intent and complete success in achieving what he had in mind, it further bolsters the notion that he is a profound talent within the electronic music world, and one that should gain far more recognition than he does.