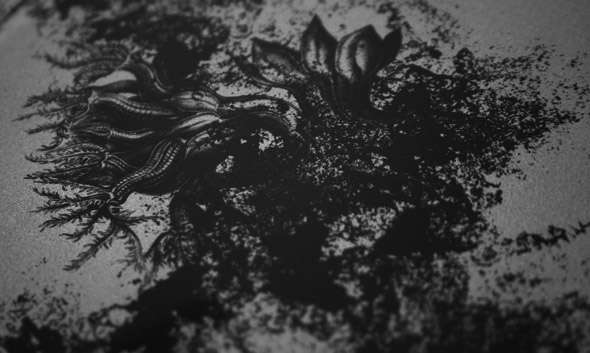 There’s an alluring sense of trepidation when holding Felix K’s Flowers Of Destruction; 15 flowers – or tracks – planted into three gun-metal discs, encased in glossy silvered sleeves. Its gatefold packaging – greyscale and sleek in design – silently stares back at you like an unopened Pandora’s Box. Central to the album’s artwork are off-cuts of pencil-sketched creepers, reminiscent to the coloured drawings of Roger Corman’s 1960 The Little Shop Of Horrors. An opened gatefold reveals the album’s cover art in its spread and inverted form; a rectangular strip of sprawling ivy, the mutant kind you’d expect to see strangling the walls of Chernobyl, in parts spilling over its rulered edges like tentacles reaching out of a fish tank.

It’s a fair representation of Felix K’s music; sonically overgrown drum and bass inspired by techno unrestricted by tempo or BPM. The album’s opening track, “Flower Of Destruction #1”, introduces Felix K’s debut album with pitter-patter percussion and ‘90s techno influenced dubbiness, with a quick-fire Chicago bassline softly embedded in a swathe of reverberating ambience; analogue claps sporadically sounding-off like misfired gunshots in the background. It acts as a prelude to the spacious and tribal “Flower Of Destruction #2”, which only after a wavering vocal, drunk on tremolo, does the natural inclination to play vinyl LPs at 33rpm seem unnatural.

It suggests the inbuilt audiophile in Felix K, and the German psyche – for a 12” record to be cut at a premium +6dB at 45rpm only allows approximately nine minutes of audio – two tracks in and Felix K is already breaking the frame. At its intended 45rpm setting, “Flower Of Destruction #3” radiates a beat-less melancholia, while for the experimentalist DJ or inquisitive listener, 33rpm is a slower, gloomier option.

“Flowers Of Destruction #4” and “#5” blend into the one cohesive piece on side-B of disc one. Rolling Kalon drums, tamed Sandwell District bleeps and tranquil tones in “Flowers Of Destruction #4” are caressed and strafed by a DeepChord ambience, lightened by melodious tom drums, synthesised insect noises and other jungle clamour. Ending with a rainy outro – eerily reminiscent of the intro of The Doors classic “Riders On The Storm” – “Flowers Of Destruction #4” wilts away into the temporary calmness of “Flower Of Destruction #5”, and like thunderous clouds rumbling in the distance, echoing Function-sounding bass stabs are played like a discombobulated version of the five-tone motif in Steven Spielberg’s Close Encounters Of The Third Kind.

Traditional knee-jerking drum and bass comes to the fore in “Flower Of Destruction #6”, as a shellacking halftime groove gracefully flows like the liquid drum and bass of DJ Marky and techno of Mike Parker. The album’s halfway point, “Flower Of Destruction #7” begins similarly to a Wu-Tang album skit, only effected with heavy delays and reverb, like a 2013 remake of that infamous acid trip scene in Dennis Hopper’s Easy Rider. Rewardingly, Felix K settles the album’s most challenging listen with a soft and ambient closure.

Function bass-chords return on “Flower Of Destruction #8”, reentering after the sound of more rain, this time mixed with crackle, snaps and needle-popping-on-vinyl percussion. After a drop in amplitude, Adam X industrialisms, similar to his Outflow Boundary EP for droney techno label Prologue, dominate the mix; a Berghain-y cohesion of Photek’s “Ni Ten Ichi Ryu” and Source Direct’s “Exit 9”. Halfway through the album’s eighth flower, sounds from the intro reemerge, this time with a subtle space western motif of laser gun synths and wise words from an Obi-Wan Kenobi-type. A second industrial drop of frenetic and satisfyingly body rhythmic drums then completes the piece. “Flower Of Destruction #9” provides notable contrast; a morbid whale-song of heavy-handed bass temperaments like PAN trio Mohammed.

Felix K’s drum and bass preference turn slightly towards the classic electronica of early Warp in “Flower Of Destruction #10”, where a barely there drum-pattern, at times, becomes as confusing as Villalobos’ more bizarre arrangements, while twisted percussion shrieks like wrenched metal. Heavy doors that sound like they’ve been slammed in a large, reverberant warehouse back an exorcising vocal that creates the disorientating bellow that is “Flower Of Destruction #11”, leading into the unbalanced Tibetan singing bowl swirl of “Flower Of Destruction #12”.