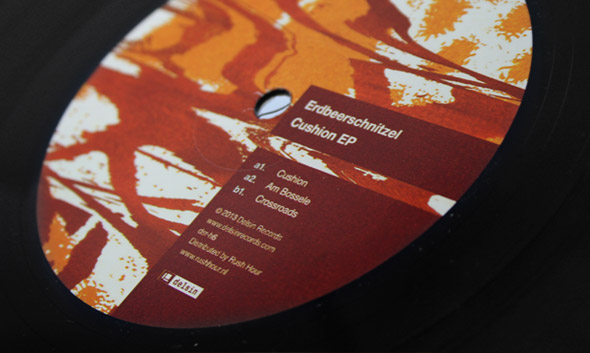 Tim Keiling has blossomed as a producer since he first emerged with his particularly quirky brand of sonics in the late 00s. Emerging from the net label scene it wasn’t long before he was snapped up by the likes of 4 Lux and 3rd Strike for his unique and idiosyncratic approach to making house under the colorfully titled Erdbeerschnitzel moniker. If there is an obvious reference point in terms of Keiling’s school of thought in making music, it would most likely be the mixture of tongue-in-cheek nonsense and intricate production skills that typifies Akufen and his like-minded Canadians.

However, as he has matured as an artist, so his palette has brought in more refined elements that have elevated Keiling’s music as Erbeerschitzel above the basic level of cheekiness. This comes through in abundance on this latest EP for Delsin’s house-focused series. “Cushion” kicks proceedings off, taking a gentle but firm drum pattern and slowly unfurling gossamer layers of flute and string in a heart-rending harmony.

There’s a pastoral, folky quality to the musicality within the track, whilst in between the star attractions a multitude of sounds and samples work away, populating the mix with a living, breathing animation. In its simplest terms “Cushion” is a soaring track to engender emotional moments for its listeners, but there’s an intangible feeling that the more organic elements in the track reach for something deeper than that.

“Am Bossele” is a much more electronic beast, as playful spirals of synth dart around snappy percussion and a dizzying array of micro-samples get cheeky in the mix. The reason that Keiling’s music stands apart from the wider micro-house movement is his choice in synths and primary drums, opting for full bodied analogue stylings rather than slender slithers of noise, and this comes through wholeheartedly on “Am Bossele”. However the vocal snippets that come stuttering in seem a little at odds with the rest of the track, sounding more like a throwback to the dubstep fallout’s predilection for pitched down R&B croons.

Weighing in at nine minutes, “Crossroads” is the most expansive cut on this record, making the most of more breathing room to let the mellow elements filter in slowly. It’s a laconic trip through deep house buoyed by the rich spread of sound sources, and strengthened by the same emotional purpose that made “Cushion”. Moving through varying sections of synthesised bliss, the mood remains consistently luxuriant, whether it’s cascading arpeggios or effervescent chord stabs setting the tone. A special mention though has to go to the breakdown, which sets off wonderfully deceptive false starts and flamboyant arrangement before the track kicks back in in earnest.

Viewed as a whole, the success Tim Keiling has achieved with this latest Erdbeerschnitzel offering is in keeping his individuality low-key. On the surface, these tracks make all the right moves to fit into the modern deep house scramble, and yet on closer inspection they shimmer in a thoroughly singular way. Sometimes, there is a greater satisfaction in music that does not have to loudly advertise how unique it is.

A1. Cushion
A2. Am Bossele
B1. Crossroads