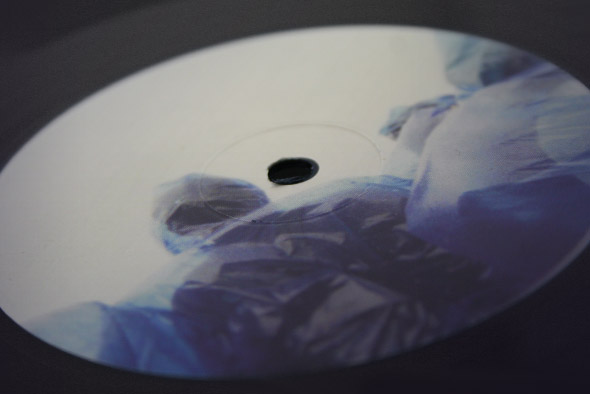 The long-promised Future Times debut of Kansas City producer Huerco S arrives, with the massive delays for the Apheleia’s Theme 12” symptomatic of pressing plant issues currently plighting many independent record labels based on the East Coast of the US. It’s an issue the label’s Andrew Field-Pickering discussed with us earlier this year, whilst a certain Ron Morelli amusingly ascribes it simply to “unbelievable incompetence”. For Field-Pickering and his Future Times cohort Mike Petillo these kind of delays must be the epitome of frustration, the nightmare scenario that prevents them from doing what they love doing –  putting out 12”s – more so when there’s an even more delayed Steve Moore 12” and a Beautiful Swimmers long player also in the offing.

If there’s any benefit to glean from this situation at all, then it’s the fact that this 12” comes at a time when Huerco S as a producer is more widely known, as opposed to his status as one spoken about in hushed terms on Tumblr posts, tweets and Soundcloud accounts when word of their intentions first broke roughly ten months ago. In this interim period, there has been Huerco S material tied to Opal Tapes – later released on Boomkat’s Editions label – and Anthony Naples’ fledgling Proibito label, and Apheleia’s Theme has finally arrived in advance of the publicity-shy producer’s forthcoming debut album for an as yet undisclosed label. Such deployment of devil’s advocacy would probably be brushed aside by the affable Field-Pickering and Petillo who’d rather not have to deal with pressing plant issues, but at least things have indeed become better in future times.

For Huerco S himself, this 3 tracker accelerates further his claim as one of the most exciting producers in the spectrum of lo-fi house productions. The grizzled title track packs a satisfying opening punch, launching into action via one of the meatiest kick drum thuds in recent memory, joined by a well measured bassline slips that into gear and teeters nervously. These dual elements act as orchestrator to a succession of rhythmic textures that combine to give the production some notable weight upon which Huerco S can test its emotional resolve with seductively dubby chords. It’s intriguing to mess with the inherent drama that these chords bring to the production through the pitch adjuster; slide it down to -8 and the track takes on a hypnotic, druggy sensation not apparent when proceedings are pitched at neutral or above.

It’s hard not to draw parallels with the work of Jamal Moss when listening to the gauzily smudged “Ausschachtung”, its woozy concoction of garbled vocals and softly oscillating synth lines swaying to their own beat over cruddy recycled drums and a bassline that veers from throbbing to catatonic. Sandwiched between the relative immediacy of the title track and the twilight effervescence of “Cercy”, you feel that Future Times chose to include “Ausschachtung” to showcase Huerco S’ sonic diversity, a factor that’s become apparent in the material he’s released whilst they experienced pressing hell. As for the final track, it’s perhaps this writer’s favourite Huerco S production to date with karate chop drums increasingly buried beneath layer and layer of glistening texture that feel totally life-affirming as they rise and rise.