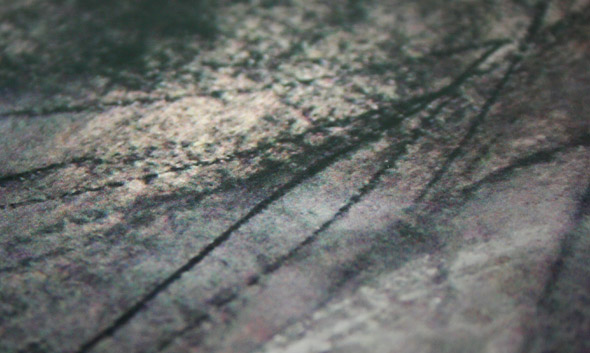 It’s been 12 years since Dispatches, the nominal first album from US producer Mike Parker and in the interim period a lot has changed for the art teacher from Buffalo. The gradual acceptance of more abstract forms of techno has benefited Parker, as has a return to purist, reduced sounds. Like the art that adorns the covers of releases on his Geophone label, Parker’s music embraces the principles of minimalism and forges its own path.

There is always a danger in using just a few elements that a track sounds boring, but Parker has the ability to vary each part, gradually altering the landscape to keep the listener engaged. If there is a theme to Lustrations, it is exactly this, that repetition can represent a form of change. The other notable factor about Lustrations is that it appears to be an album divided in two.

The later tracks are more abrasive and jarring, with the distorted broken beats of “Lustration Nine (Drums)” and the malignant acid of “Lustration Eight (Contours)” showing a harsher side to his productions. Indeed, “Lustration Eleven (Sarychev)” comes across like a modern take on Synewave releases, whilst “Lustration Ten (Pressure Zone)” sees him push this approach further and add a grimy layer to the tonal bleeps that have become his stock in trade.

On the first half, Parker’s signature sound is audible in abundance; “Lustration One (Khonsu)” kick starts the album into action with searing tones and stomping beats, “ Lustration Five (息)” sees Parker cast a long, textured shadow over his insistent bleeps and the murderous bass of “Lustration Tree (Atlantic)” is one of his most menacing productions so far.

Parker has made this sound his own, but his influences surface occasionally on Lustrations and “Lustration Six (Megalith)” is a good example; like a turbo-charged version of Plastikman’s classic remix of Robotman’s ‘Do Da Do’, its pulsing, heads down rhythm gradually shifts down and back up the sonic scale, pushing the listener down a wormhole without recourse to crashing snares or other well-worn ploys. It shows that Parker’s greatest weapon is repetition and he deploys it to dizzying effect on Lustrations.