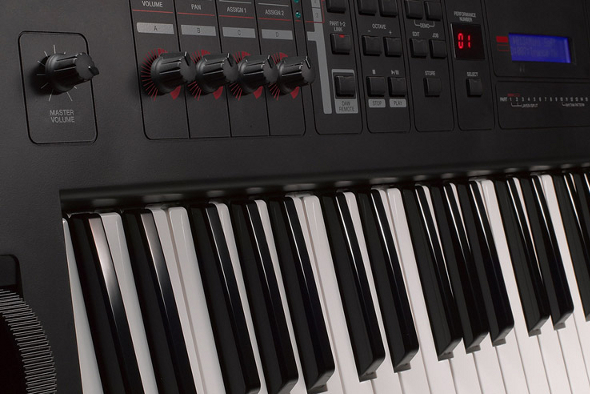 Rob Lee looks at the latest lightweight keyboard from Yamaha, including a highly acclaimed sound library from its flagship MOTIF XS line, and built in audio & MIDI interface capabilities.

Yamaha have a considerable pedigree with hardware synths; in 1983 when they developed the DX7, the first affordable digital synth, which remains only second in terms of sales to Korg’s iconic M1. Fast forward to 2013, and we find Yamaha have been listening closely to their customers, who have been asking for an affordable lightweight performance based synthesizer with a killer sound library that is equally at home on the stage as it is hooked up to the latest computer based production studio.

To this end they have developed the MX series. There are two versions of the new MX line of synths: the MX49, and the MX61, which only differ in the number of notes presented on the keyboard. Here we investigate the MX61, whose 61 keys presents the more piano player friendly version, allowing players to make the most of some of the carefully chosen sounds from the library of the MOTIF SX series, released a few years earlier. A quick search through the preset categories finds some of Yamaha’s best acoustic piano sounds, electric pianos, clavs & wurlitzers, as well as organs, basses & guitars. If you are a fan of more complex synth sounds then you’ll be happy to hear that the MX61 also has several banks of eight element patches including complex leads, pads & syncs. Live performers will like the easily implemented split and layering modes that give you the options of combining two patches with two independent arpeggiators, of which there are 999 different patterns to assign, as well as a drum track part, of which there are 128 to choose from. 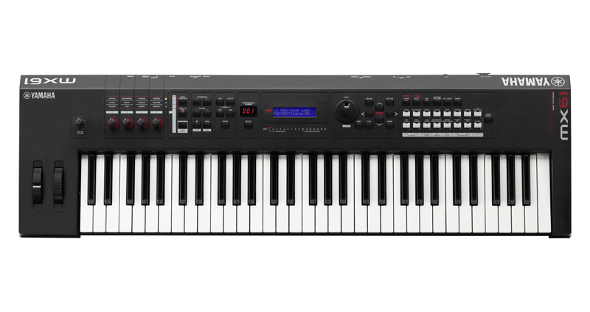 Adding to the performer’s arsenal are some ADSR type knobs that are programmed to control some of the more usual live parameters, such as filter cutoff and resonance, chorus & reverb send, amp ADSR, part volume, pan and two assignable controls. There is a button that changes between three rows of functions for the ADSR knobs, simplifying the layout. Virtual circuitry modelling (or VCM) has been used to faithfully recreate the sound of vintage effects such as phaser, wah and EQ as well as the on-board reverb effects.

Both the MX49 and the MX61 ship with Steinberg Cubase AI software as well as Steinberg Prologue, and an organ emulator named the YC-3B which will be welcome news to those new to studio production. Either of the MX synths will act as a controller for your music production software of choice by way of USB port and computer. You can then map the control surfaces and buttons on the MX61 to your soft synths, DAW, or both. The computer integration continues as the MX61 also fuctions as an audio interface, meaning that once you have connected it to your computer via USB you can monitor sound from your Mac or PC via the headphone jack or by connecting the outputs to speakers or a PA system. There is an auxiliary mini jack port on the rear panel that gives you the option of adding another media player such as an MP3, smart phone or tablet device for playback. Finally, there is another USB port on the rear that makes it possible for you to playback wave files directly stored on a memory stick as well as saving any form of data from the hardware directly to an external memory device.

The MX61 is billed as the synth that bridges the gap between computer based production studios and the live arena and to this end it performs all of the requirements you may need from such a synth. It’s more than likely that anyone interested in this hardware will already have music production software in some form or another, and will already be making use of soft synths on a regular basis which is why controllers of great design are so important; the MX61 itself is sturdy, lightweight and mobile, with a very playable and well made Yamaha keyboard action, while it will also deal with traditional external MIDI devices via the I/O ports on the rear.

However, not all soft synths come with great sound libraries, and those that do can be expensive, so the built in MOTIF derived sounds are a solid addition here. There is an absence of an on-board sequencer on this keyboard, though this is probably because most of us have little or no need for a cumbersome workstation due to the advent of computer and tablet based music sequencing software. The MX61 features up to 16 multi-timbral parts with 128 note polyphony so there is little chance of your DAW throwing anything at it that it can’t cope with. 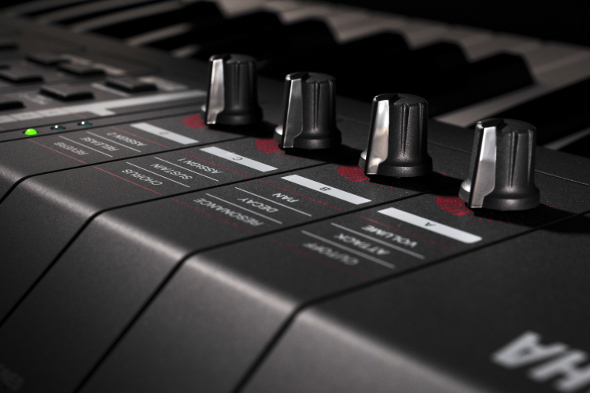 It is equally possible to view this hardware as an affordable standalone synth which is also ideal for live performance with the addition of MIDI controller and audio interface possibilities, as it is to view it as a keyboard controller that doubles as a high quality digital synth with a well respected sound library. It could be viewed as slimmed down version of Yamaha’s very own MOX6 synth, but if you want to view it as a controller keyboard with the added bonus of being a stand alone synth then there is very little to compare it to. Korg have the PS60, which is a performance synth in the same price range as the MX61 but doesn’t feature the same audio interface capabilities. There is also the GW-8 from Roland, but it falls into the category of a workstation rather than a stand alone synth/controller hybrid. There are plenty of controller keyboards such as the exemplary Akai Max 49 or the Impulse, Launchkey or SL from Novation, but neither of these controllers have on-board sounds.

Yamaha have a long history of innovation in the world of keyboard instruments that has lasted over a century and there is little sign of them letting up. If you are looking for an affordable digital keyboard with good sounds that will operate as a MIDI controller with audio interface capabilities then the MX series from Yamaha might just fit the bill.